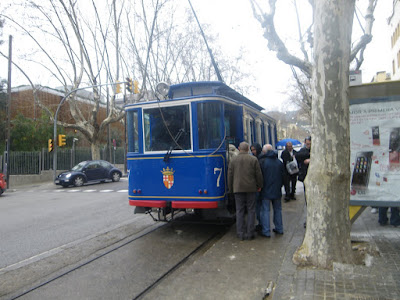 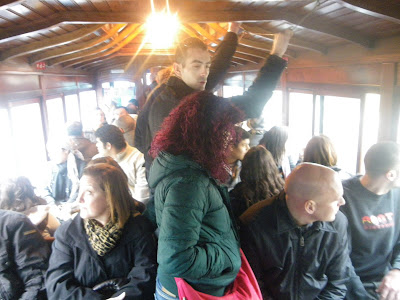 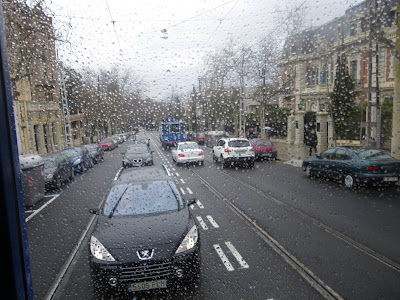 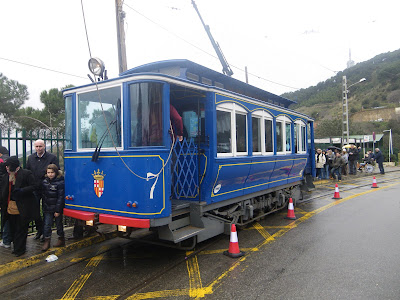 It's not often I stumble on a tramway or railway that I don't now about, but this was a genuine surprise in Barcelona. Now Barcelona has recently built an excellent new tram system, in two discrete parts, but this is a survival from the original Barcelona tram network, which was unusual in that it ran double-deckers. In fact until quite recently it was, amazingly, the ONLY tramway in mainland Spain.

It runs for about a mile from Ave. Tibidabo to the foot of the funicular that continues up to the funfair at the top. We caught it in the rain on a Sunday afternoon, and despite running services in convoy the trams were packed!

I would of course prefer to see a modern tramway, but this does serve a genuine transport need and has done so since 1901. Hopefully in the future it will once again be connected to a city wide tramway system.

(To those who complain when I add foreign pieces to this blog, remember that a search for 'Tibidabo' will bring people who have no idea that the New S&D exists to this blog!)

The Tramvia Blau (Catalan for "blue tramway") is one of Barcelona's three tram systems. It is a 1.276 kilometres (0.793 mi) long heritage streetcar line serving a hilly area of the Sarrià-Sant Gervasi district between the terminus of FGC Barcelona Metro L7 and the Funicular del Tibidabo.
The Tramvia Blau is operated by Transports Metropolitans de Barcelona (TMB) but it is not part of Autoritat del Transport Metropolità (ATM) integrated fare network. Tickets must be purchased from the tram conductor.
The Tramvia Blau is one of only two first generation tramways to survive in Spain, along with the Tranvía de Sóller on the island of Majorca.

The line was built at the instigation of Sr.Salvador Andreu, who was building a residential project around the axis of the Avenida Tibidabo, and was inaugurated in 1901. The line connected at Plaça Kennedy with trams of Barcelona's city system, but was independently owned. The line's own distinctive blue livery soon led to it becoming known as the Tramvia Blau.
The line suffered several changes in 1922 and 1958.
In 1954, line 7 of the Barcelona Metro was opened to Avinguda Tibidabo station under Plaça Kennedy, providing another connection to central Barcelona. However in the 1960s the city trams were withdrawn from Plaça Kennedy, cutting the Tramvia Blau off from the city network.
In 1971 the remaining tram routes of the Tranvías de Barcelona company were closed. However, the separately owned Tramvia Blau remained in operation. It continued in private ownership until 1979, when it was taken over by the city, who continued to operate it. Between 1971 and 2004, when the second generation Trambaix and Trambesòs lines opened, it was the only tram route in the city.

Typical Tramvia Blau street track
The Tramvia Blau is 1.276 kilometres (0.793 mi) long, climbing a vertical distance of 93 metres (305 ft) at a maximum gradient of 8%. It is constructed to 1,435 mm (4 ft 8 1⁄2 in) gauge and is double track, apart from single track stub terminals at each terminus. It runs in the Avinguda Tibidabo throughout, and is not segregated from other traffic.
The line's depot is accessed by some 100 metres (330 ft) of single track, which is not used in passenger service. The depot branch joins the main line near its midpoint, adjacent to the bridge carrying the Avinguda Tibidabo over the Ronda de Dalt.
The line serves the following stops: 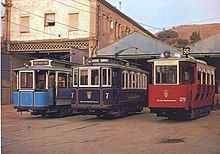 Cars 2, 7 and 129 posed in front of the depot in 2005. Car 7 is in its pre-rebuilt condition, as can be seen by comparison with the image at the head of this article.
The line is operated with a fleet of seven historic tram cars:
Posted by Steve Sainsbury at 13:17