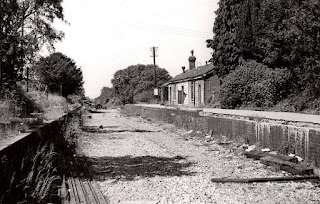 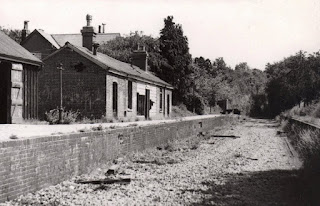 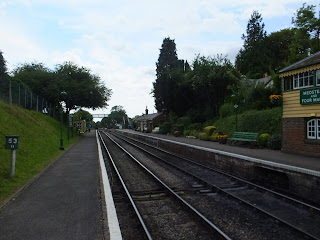 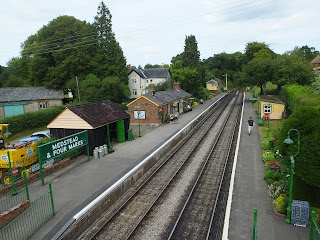 One of the biggest transformations - and a good one - is the Mid Hants restoration of Medstead and Four Marks station. When I visited back in 1976 it was at its lowest ebb, with the track recently lifted and the building starting to fall apart.

In fact without knowing the station's history it would be difficult to believe that the top two pictures were real!

The station has been lovingly restored and now also has a shelter on the down platform and a classic LSWR signalbox on the up platform.

This shows what can be done with determination and a long term plan and the Mid Hants is a superb example of a line that has been through the process of run down and closure, slow revival starting with industrial locos and an eventual recreation of what inspired the original preservationists. The line is also an excellent tourist attraction in itself as well as a way of reaching a number of other tourist attractions en route. The line now employs people as well, further regenerating the local rural economy. 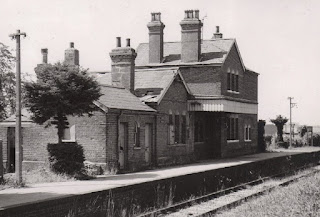 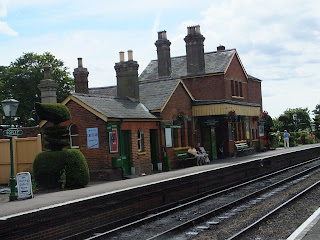 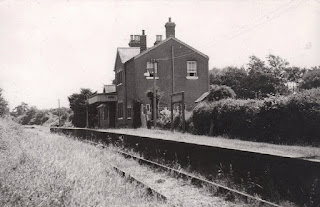 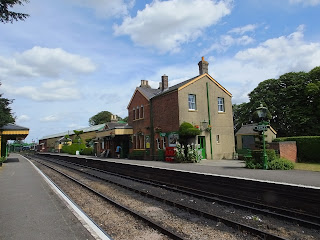 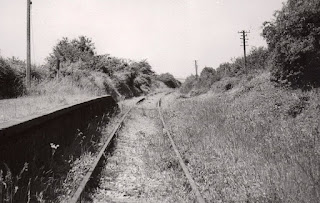 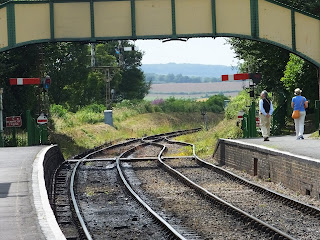 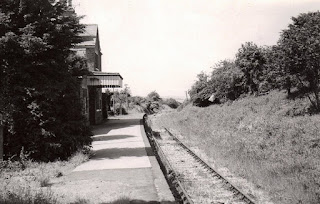 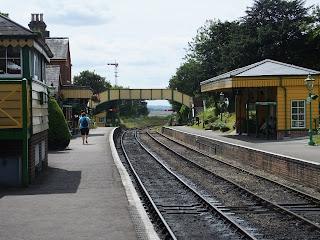 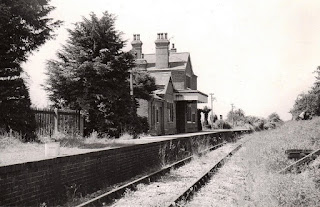 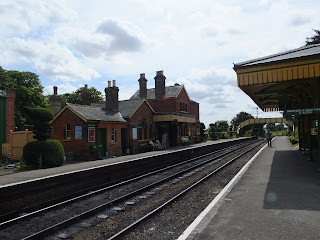 I was lucky enough to visit the Watercress Line on Saturday, though sadly not able to travel on it. For a change I called in at Ropley and Medstead as I've always found the two termini hard to photograph. There were no such problems at the two intermediate stations!

I last visited Ropley in June 1976, before the line was reopened, and it was in deep sleep. The station is completely transformed now, as is the area it sits in, but fortunately there's no housing development and the location is still very rural. The station has of course been totally restored and the up platform and buildings have reappeared. There's a signalbox and also a large locomotive works. All in all a very pleasant spot and still with plenty of railway atmosphere.

I was lucky enough to travel on the line in BR days a few times, and I've also been a couple of times since reopening. I still find it odd that this useful line was closed, serving the large town of Alresford and also providing an excellent alternative route when the main line is closed or blocked. I'm sure the missing link via Itchen Abbas will be rebuilt in the future and the line morph into a community line with a proper 365 day service but with plenty of heritage atmosphere and trains of course!

The station was opened by the Mid-Hants (Alton Lines) Railway (MHR) on 2 October 1865. The MHR was leased to the London and South Western Railway (LSWR) in August 1880, which fully absorbed the MHR in June 1884. The LSWR amalgamated with other railways to form the Southern Railway on 1 January 1923.
The station was closed by British Rail on 5 February 1973.

Ropley railway station was reopened by the Mid Hants Railway (Watercress Line) on 30 April 1977. It is an intermediate station on the preserved Watercress Line, which runs from Alton to New Alresford.
The main locomotive shed and workshops for the Mid Hants Railway are located just to the east of Ropley station.
The station gardens feature notable yew topiary, which has been in situ for over 100 years (an 1898 postcard shows the topiary well established).
A footbridge was added to the western end of the station in 1986. This was recovered from the closed station at North Tawton in Devon in August 1983, restored and installed by volunteers.

In 2012/13, a footbridge, originally located at King's Cross station in London, was dismantled and later re-erected at Ropley station for a new lease of life, above the maintenance shed, where passengers can walk over and view the works below.
Posted by Steve Sainsbury at 04:29 1 comment: 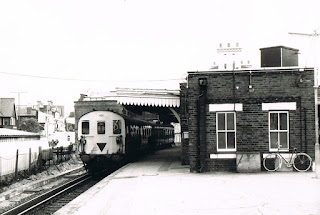 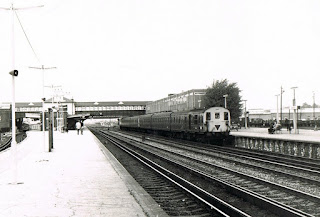 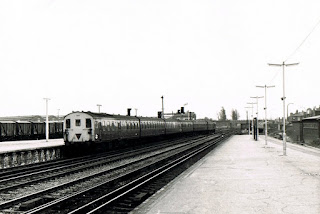 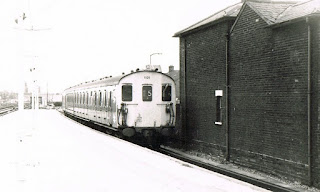 Back in May 1973 I was just sixteen and armed with the ubiquitous Zenith Russian-made camera that most of us had (and a few frames of film) I made my way over to Eastleigh for the Works Open Day. This was never really my thing, I've always been far more interested in the lines themselves rather than what ran over them, but it was fun to get close to stuff for a change! Back then I was still sulking that I'd just missed real steam (which had ended less than 6 years at Eastleigh) so the presence of a steam loco caught my interest.

The few random shots of the station ooze atmosphere now, being 42 years old! For some reason I only seem to have taken pics of rail blue Thumpers, but having been brought up slap bang in the middle of Southern Electric territory diesels in any form were VERY exotic, which probably expalins it!

At Eastleigh there was an interesting combination that was working the shuttle into the works itself - Class 33 6535 and 4-TC 418. 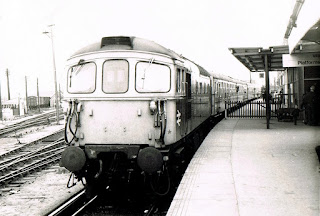 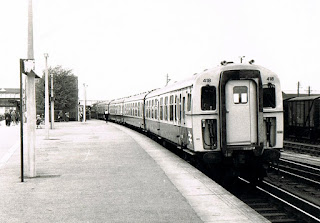 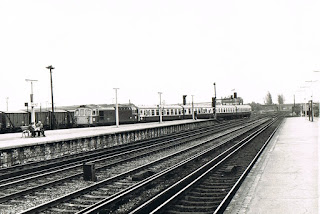 It was a quick trip into the Works! (The Ford Anglia wasn't one of the displays by the way!) 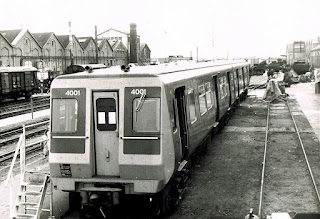 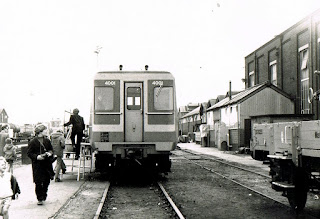 Also on display was this nice pre-TOPS class 73 and School Class 'Stowe'. 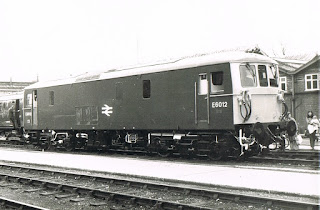 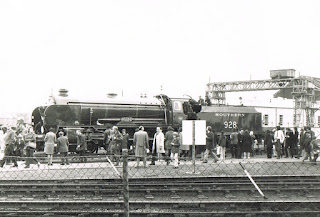 Back to Littlehampton via Fareham, Fratton and Barnham and a last look at the event ... 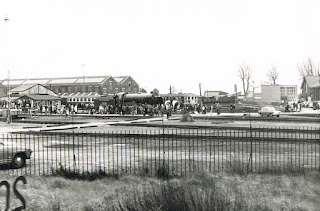 Eastleigh Works is a locomotive, carriage and wagon building and repair facility in the town of Eastleigh in the county of Hampshire in England.

The London and South Western Railway (LSWR) opened a carriage and wagon works at Eastleigh in 1891. In 1903, the Chief Mechanical Engineer, Dugald Drummond oversaw the construction of a large motive power depot in the town replacing the existing maintenance and repair shops at Northam, Southampton. In January 1910, locomotive building was likewise transferred to the new workshops at Eastleigh from Nine Elms in London.
Among the locomotives produced by the LSWR under Drummond at Eastleigh were the S14 0-4-0 and M7 0-4-4 tank engines, the P14 and T14 4-6-0, and D15 4-4-0, classes. Following the appointment of Robert Urie as Chief Mechanical Engineer in 1912, the works were responsible for the construction of the H15, S15, and N15 (King Arthur) 4-6-0 classes, and the G16 4-8-0, and H16 4-6-0 tank engines.

The old canteen shown from inside the works November 2014
Following the merger of the LSWR and other railways in southern England to form the Southern Railway, as part of the Railways Act grouping of 1923, Eastleigh was to become the principal works for the new railway. The new Chief Mechanical Engineer, Richard Maunsell re-organised the works and directed the design and construction of various new classes.
Like most of the railway works, Eastleigh was heavily involved in the war effort, producing, in 1938, sets of parts to convert Blenheim bombers so that they could be used as fighters. The works was also part of a joint venture with other workshops, railway and private, to produce Horsa gliders for the D-Day airborne assault. With Lancing works, it turned out 200 tail units. It also produced 1,500 anti-tank gun barrels and, with Brighton railway works, 240 multiple rocket launchers, plus landing craft, fuel tenders and harbour launches.
Under the Southern Railway, the works were responsible for building the Maunsell SR Lord Nelson Class 4-6-0, the Schools 4-4-0, U1 2-6-0, W class 2-6-4 tanks, and Q class 0-6-0 locomotives. Under the regime of Oliver Bulleid, after 1937, Eastleigh works constructed all thirty of the SR Merchant Navy Class and six of the West Country 4-6-2. During the Second World War, Eastleigh works built 23 examples of the London Midland and Scottish Railway designed 8F 2-8-0s. By the end of 1947, the works had built 304 locomotives with a further 16 before steam locomotive building ceased in 1950.
In 1945, the carriage works began constructing all-steel carriages, both electric and steam hauled. It pioneered the use of plastics and glass fibre reinforced resin for doors, seating and roof sections.

In 1950, following the nationalisation of the Southern Railway to form the Southern Region of British Railways new steam locomotive building ceased at Eastleigh. However the works were kept fully occupied between 1956 and 1961 in rebuilding over 90 of the Bulleid 4-6-2 classes. Thereafter the works gradually changed over to steam and diesel repairs.
In 1962, the works was again reorganised with the carriage works site being sold, and carriage and electric multiple unit repairs transferred to the main locomotive works.
In 1962, Eastleigh carriage works[contradiction] built the first six electro-diesel locomotives of British Rail Class 73 but the remainder of the class were built at theVulcan Foundry.

A circular view from a central part of the sheds in November 2014.
The plant was acquired from BREL through a management buyout becomingWessex Traincare Ltd; it was acquired byAlstom and renamed Alstom Wessex Traincare. The site was used for carriage and multiple unit repairs. In 2004 the company announced it was to close the works due to lack of work, work at the site continued until March 2006.
The 42-acre (17 ha) site has been managed since 2002 by St. Modwen Properties in 2007 Knights Rail Services (KRS) began operations on site, using it to store off lease rolling stock, as well as undertake repairs and refurbishments. As of 2010, the site's facilities include overhead cranes, third rail electricity supply, paint facility, and refuelling facility. Additionally Siemens undertook maintenance of Class 444 and Class 450 on site, and Network Rail MPVs were stored on site. Arlington Fleet Services Ltd. (maintenance, heavy repair, painting) performs maintenance from the site.
In 2012 KRS acquired an extended lease on the site to 2016.

Posted by Steve Sainsbury at 11:10 No comments: 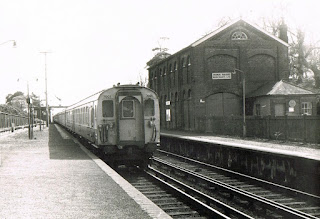 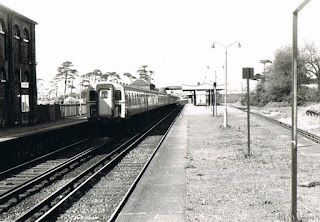 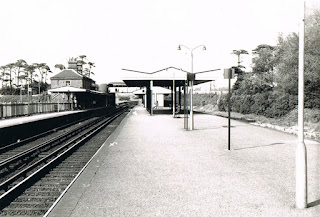 Arundel is an intermediate station on the Mid-Sussex line, the first stop coming up from Ford. It serves the town famous for its castle, about a half mile walk from the station.

The train service has been fairly basic since I've known the station with EMUs making up almost all services. Back in 1973 there was still a bay line in place, which until the year before was used by the useful Littlehampton-Ford-Arundel shuttle which helped to tie in the various services in the area. I'd always found it useful but BR obviously didn't think the same! I actually travelled on the very last Arundel to Littlehampton train but sadly the photos didn't come out as it was pitch black!

The Mid Sussex is a very scenic route and highly recommended. There has been talk in recent years of building a brand new link from south of the station to the Coastway West route with a junction facing Brighton, to serve as a diversionary route when there's trouble on the Brighton Main Line but logic would suggest the Lewes-Uckfield link would be more useful as well as generating a lot of new passenger traffic. We'll see!

The station building at Arundel still stands and was almost identical to the original Littlehampton station, which was demolished before World War Two.

Arundel railway station serves the market town of Arundel in West Sussex.
The station is on the eastern side of the town, about 550 yards (500 m) from the High Street, across the River Arun.

The typical Monday-Saturday off peak service is:
On Sundays this is reduced to:

Posted by Steve Sainsbury at 11:30 No comments: