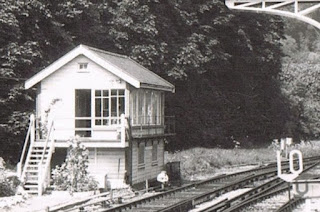 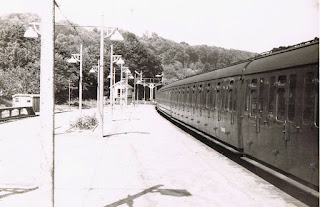 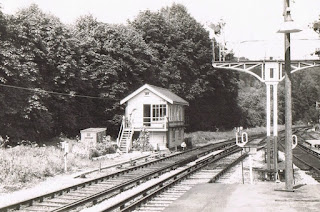 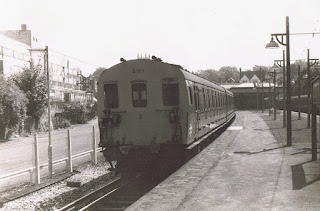 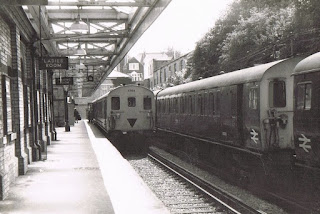 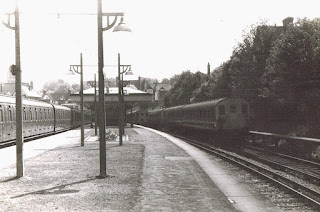 A surprisingly rural branch and station is Caterham in Surrey, the terminus of  a branch from Purley on the Brighton main line. My only visit was in August 1973 when I took these pictures. A nice feature was the small signalbox, which I doubt remains. Notice also the Southern Region signage still in place along the station building.

The Caterham branch is a surprisingly rural branch line in suburban Surrey.

The first Caterham station was opened on 5 August 1856 and the second (existing) station on 1 January 1900. The line was electrified in March 1928.

The existing station has a single island platform and a carriage siding on the up side of the station. The site of the original station is now (2017) occupied by a supermarket and the station car park. Passenger figures in 2015-16 were 1.128 million, so the station is very well used, with four trains an hour at peak times, and two trains an hour on Sundays.

The intermediate stations between Purley and Caterham are Kenley, Whyteleafe and Whyteleafe South.
Posted by Steve Sainsbury at 11:19 No comments: 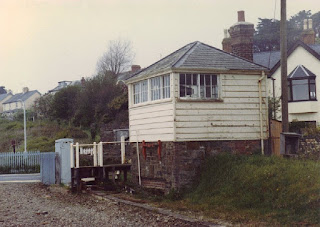 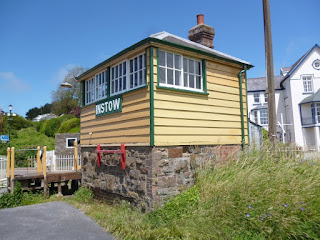 The Barnstaple to Torrington line is one of those lines that really shouldn't ever have closed, linking a number of towns into the Network in a prime holiday area. The line will no doubt reopen at some point in the future but, like the S&D, it's currently just the site of a number of separate restoration schemes. Torrington station and the start of a line northwards is under the control of the Tarka Valley Railway which aims to gradually restore the line towards Bideford. Bideford station itself has been restored and the signalbox completely rebuilt from nothing (just like at Midsomer Norton and Shillingstone) with track laid and a loco on site. The same group are also responsible for the fantastic restoration of the signalbox further towards Barnstaple at Instow, the two photos above showing this.

If you're in the area please try to take a look at what's happening on this wonderfully scenic and useful route.

Devon Transport History
Heritage and Community Railways - The Next Generation
Rail Thing - Then and Now
The Great Devon Rail Revival!
Posted by Steve Sainsbury at 09:35 No comments: