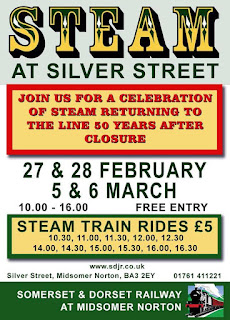 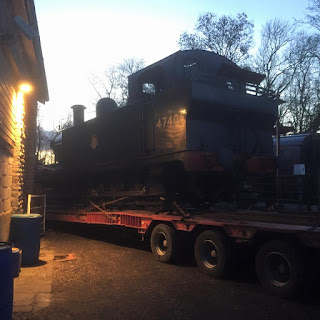 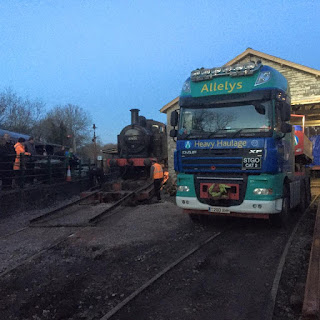 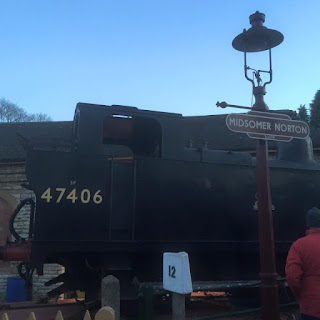 The Jinty arrives (all via Somerset and Dorset Railway Facebook) 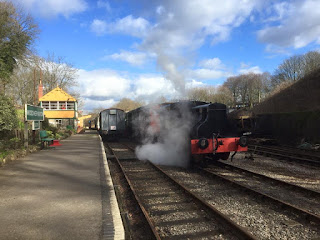 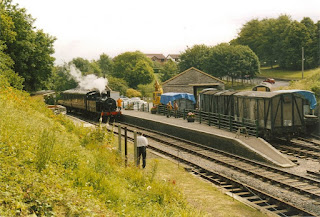 The S&D just keeps getting better and better. The next two weekends will be celebrations up and down the line of the original (and now quickly being forgotten!) closure. Midsomer Norton will be leading the way with two engines in steam, the Gartell will be operating 2 foot gauge versions of the last trains and the last Pines, Shillingstone will be showing off its two steam locos and Spetisbury has a small display. Let's see how many of you can visit all four sites (with a stop off at Midford as well of course, with big news from there being announced after all this is over!)

I shall be going down to Midsomer Norton on a sunny day (if available) or a gloomy one if not! There's no way I'm missing this. I was there for thr 2005 visit of a Jinty and it was an amazing experience. I seem to only have the one photo of that event though, it was the year before I switched to digital!
Posted by Steve Sainsbury at 12:26 No comments:

Threading through the South Downs 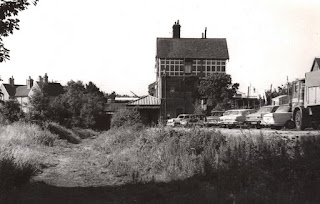 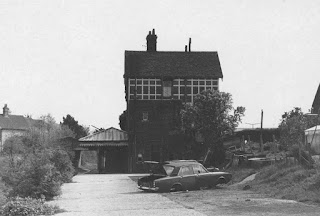 Imagine a single track railway with impressive tile hung stations running through a National Park linking a cathedral city with a country town, using exclusively steam - over bridges and through tunnels cutting through the South Downs.

Not quite the Bluebell or Cuckoo lines - the line was the Chichester to Midhurst branch of the LBSCR. The line closed throughout to passengers as long ago (as did Chichester's other branch line) but kept going with freight traffic throughgout until 1951 when flooding led to an accident which effectively cut the line between Cocking and Midhurst. Most of the remainder of the line closed in 1953, apart from the two mile section to Lavant which remained open until 1970 for seasonal sugarbeet traffic. An even shorter section of the line opened as far as a gravel pit south of Lavant, this final section closing as late as 1991. 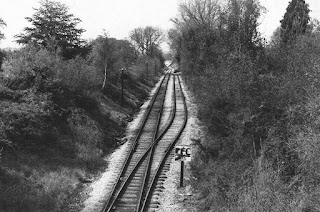 These are the basic facts about this line, but I had a much closer attachment to the route, as back in the late 60s and early 70s it was the closest disused line to where I lived in Littlehampton, and I regularly visited the line at Lavant, just catching it whilst the track was still down. The track ran through the station and tantalising beyond northwards to vanish in long grass with the South Downs as a backdrop. So a regular trip for me in that period was to catch the train from Littlehampton to Chichester, then walk until I could pick up the track south of Lavant.

The line beyond was a mystery to me and I never ventured beyond Lavant in those days. But a few years later I had a motorbike and followed the route northwards. I did get to photograph Cocking station, but Singleton was too scary to approach with it being a working vineyard (a rare thing even in Sussex back in pre-Global Warming days!) 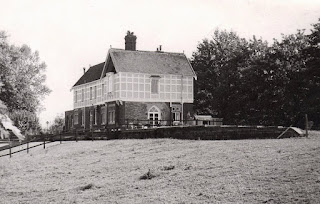 I had even been lucky enough to see the closed LBSCR station at Midhurst which marked the northern end of this route back in about 1970, shortly before it was demolished and a year before I started taking pictures. I even found the long abandoned LSWR in Midhurst on the same day which hadn't seen trains stop since 1925 (?) when all services began to use the more imposing LBSCR station. 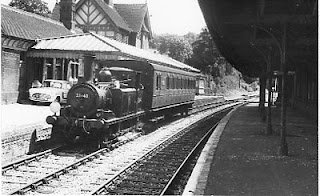 I haven't been back to this line for many years. The trackbed is now a cycleway and footpath and the station at Lavant has been converted into flats (it was a very big station for a small village!) Singleton is still a vineyard and Cocking is an impressive private house. You'd hardly know Midhurst ever had a station let alone two.

The future? Well Midhurst will need trains again one day, that's for sure. There were three branches to Midhurst, from Chichester, Pulborough and Petersfield. But the most useful line never actually got built - a direct route to London via Fernhurst and the Portsmouth Direct route ...

There have been schemes over the years to reopen at least part of the Midhurst network, albeit as a heritage line. One thing's for sure, no railway ever really dies, and they are all just waiting for their time to come.
Posted by Steve Sainsbury at 11:57 8 comments: 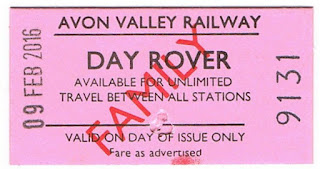 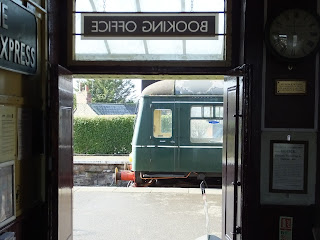 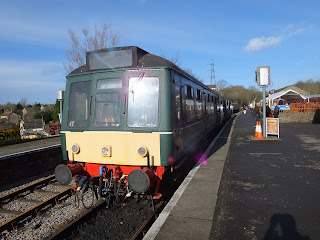 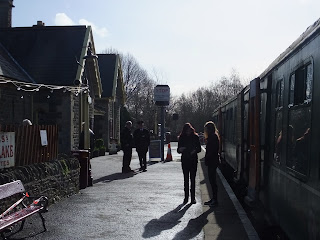 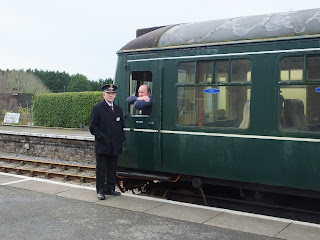 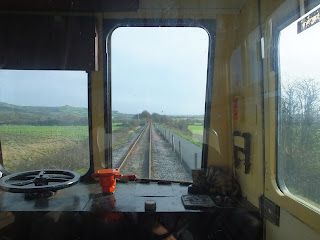 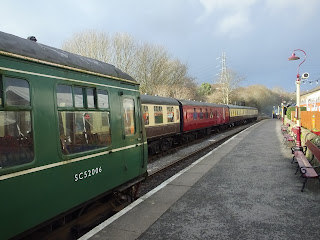 Probably the closest heritage railway to me (other than the Bristol Harbour Railway) is the Avon Valley Railway. It's a strange set up with the trains running out from Bitton towards Oldland Common firstly, followed by a return to Bitton, then a 15 minute wait for the trip out to Riverside. There are about ten minute waits at each end. Basically it means that one train can provide the service. We were lucky to get - again - the DMU on Tuesday. A real test of a heritage line is whether kids like it, and we had a five year old and a seven year old to keep entertained. They oved it and particularly liked the opportunity to go 'free range' throughout the two carriages, plus of course get the view through the front window. They were quickly told NOT to distract the driver!

AVR tickets are rover tickets so you can do as many trips as you want. We did four or five! There's also excellent catering facilities at Bitton and the food was good value, good quality and decent helpings! We made a second trip to the catering coach for tea and cakes later in the day.

The shop is pretty good, mainly because they have an excellent selection of secondhand railway books at VERY reasonable prices and not just the usual generic thoughtless Christmas present dross!

There were a few steam locos at the end of Bitton platform, one actually seemed to be in steam but wasn't being used. I don't think I've ever actually travelled behind steam on the AVR, but that's not a big deal for me anyway!

The only real issue I have with the AVR is its apparent lack of ambition. Bath lies just a mile or two beyond the current eastern terminus at Riverside - a run into the city would attract many extra visitors, mainly from Bath towards Bitton. The original plans for the reopened line were probably 50 years ahead of their time, a commuter service between Bath and Bristol was proposed, with some heritage  services at weekends. Perhaps it's now time to look towards the future and realise that the original plans were simply way ahead of their time. Having travelled between Bath and Bristol lately, on a Sunday evening, on a train that was packed to standing, perhaps it's time to address the capacity issue by offering an alternative. Bath Green Park station is still there ... and the line can be reinstated without too much difficulty ... and eventually the S&D will be returning to Bath. The best days for the AVR lie ahead in the future, but for now it is a very pleasant way to spend a few hours on a winter's day!

Posted by Steve Sainsbury at 11:25 No comments: 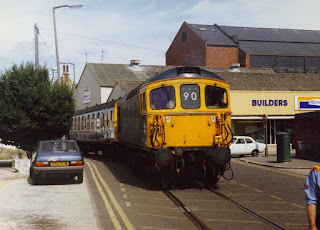 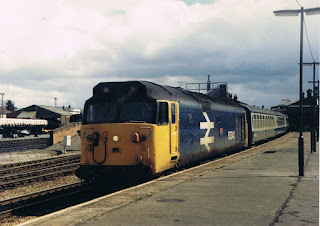 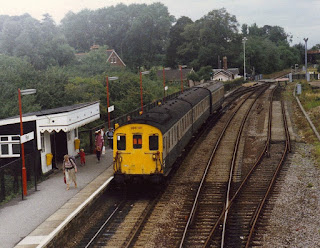 I had a pretty varied 1980s with four long trips to Europe, a driving job that took me all over the country and a reasonable income that allowed me to buy all the film I wanted! I probably took more photos in the 80s than in any other decade - at least until I discovered digital in around 2005.

So I have a vast collection of 1980s shots, many of which still haven't been scanned and uploaded.

In general the 80s were a transitional decade for rail in the UK. Closures finally came to a halt, the last real closure happening in 1985 when the Eridge to Tunbridge Wells line closed. The first steps towards privatisation were made near the end of the decade, and liveries started to change. I'm not a big loco fan but I'm pretty sure some of the familar locos (and units) started to vanish in this decade too!

I got to know Switzerland really well and spent probably a year or more there in the 80s - this is reflected in my photos (though not on this group of course!) All in all a great decade for me when I got to do a lot of travelling and photography.

Of course the group isn't just about my photos and travels, there are currently 2,468 members so there is a wide variety of pics and memories on the site!

Posted by Steve Sainsbury at 10:33 No comments: