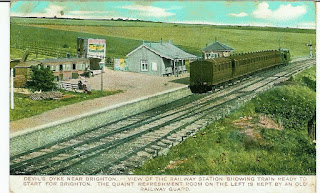 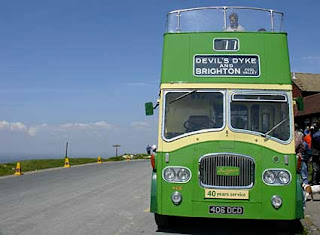 
Growing up in Littlehampton my nan's house faced a bus stop where some buses carried intriguing detination board for 'Devil's Dyke'. It seemed an impossibly romantic place but sadly well beyond our financial resources in the 1960s to visit! So I never made that bus trip which in the summer would have been on an open topped bus.

Later I discovered that Devil's Dyke also once had a railway running to it. This was even more tantalising. In the 70s I finally got to visit the Dyke, following the old railway up into the Downs after alighting at Aldrington Halt.

There were remains of the route throughout, once I got out of the suburban part. The Dyke itself was a bleak place, even on a summer's day, devoid of people or anything else apart from the farm that barred entry to the still existing Dyke station platform.

Delving into the history of the railway and the Dyke gave a fascinating insight into just how different Edwardian Sussex had been! For the Dyke Railway brought visitors up from Brighton and beyond to a whole range of attractions set hundreds of feet above the glittering coastline to the south.

The railway was opened on 1 September 1887' leaving the Portsmouth-Brighton line at what later became Aldrington Halt, climbing through the suburbs and on to the Downs. This was the only railway to climb the South Downs properly, other routes to the west tunneling through them instead. The route was approximately 3.5 miles long with an average gradient of 1 in 45.

The line's glory years were in Edwardian times (1901 to 1910), the First World War followed by an increase in motoring (no doubt including the precursor to that 31 bus that went past my nan's!) affected railway numbers, with the line closing completely on 31 December 1938.

As well as the railway there were two other unusual transport attractions at the top. There was a funicular railway down to Poynings which was 840 feet long with a gauge of 3 feet. It was called the Steep Grade Railway. This line opened on 24 July 1897. This was the only inland funicular passenger line in Sussex. It didn't last long, closing around ten years later. 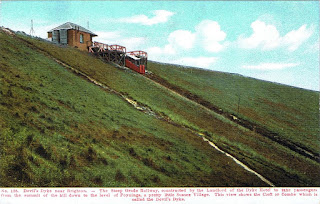 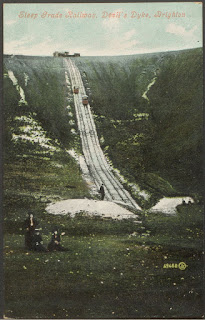 There were many attractions at the Dyke including a hotel, amusements and a switchback railway (roller coaster). Many speculate that the Steep Grade Railway was closed because it was siphoning off trade from the Dyke's attractions to shops and pubs down in Poynings.

Another rail-like attraction was the Aerial Cableway, which spanned the Dyke itself. It was designed and built by William Brewer in 1894, it was made from 1,200 feet of cable, suspended  230 feet above the valley floor on cast metal supports.

It had two cars, each carrying just four passengers, which were pulled across the Dyke by a cable worked by an oil engine. 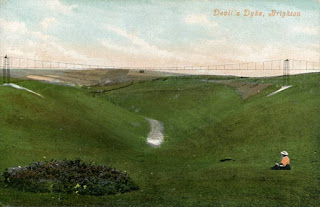 
Like the Steep Grade Railway its popularity was short-lived, opening on the 13th October 1894 and carrying its last passengers around 1909.

The Dyke Railway is an unusual example of a railway that depended purely on an ephemeral, once fashionable, desire for entertainment in strange places from our ancestors. The whole set up burned brightly for a few decades before all returning to dust and the normal bleak beauty of the high South Downs.

Posted by Steve Sainsbury at 06:59 No comments: 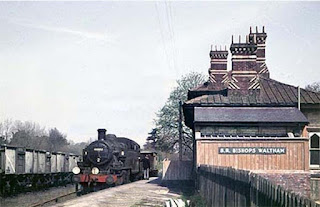 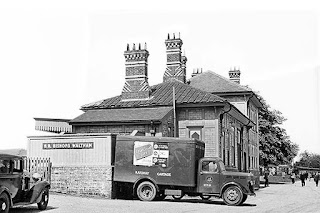 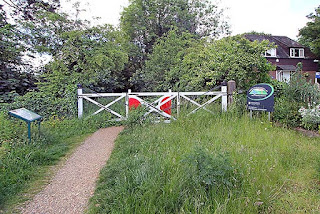 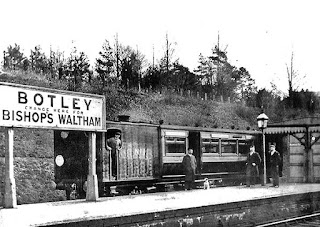 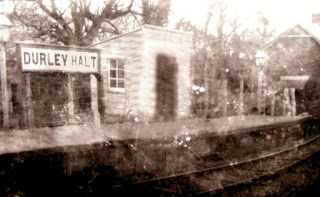 On our regular trips to Winchester to visit relatives in the 1960s and 1970s we normally went via Bishops Waltham, and there was an intriguing pair of old level crossing gates by a roundabout near the town centre.

Research revealed that these were a remnant of the branch line from Botley, on the Fareham to Eastleigh line, to Bishops Waltham. This line opened on 31 December 1863, closed early to passengers on 31 December 1932, and completely in 1962.

Following the course of the River Hamble for much of its route it was single track throughout and lightly engineered with just a few underbridges. There was a small halt at Durley (see pic above) which only opened in 1910 and only saw light traffic.

There were other rail proposals in the Bishops Waltham area which never saw the light of day (or at least not yet!) including a line to Petersfield and another to Alton. A further, later,  proposal was a route to Droxford on the Meon Valley route from Fareham to Alton.

Passenger and freight traffic was generally light, except in the strawberry season when there would be many special trains carrying the fruit to the markets in London.

Railmotors were used for a short time but lacked flexibility as they couldn't pull additional coaches.

A short section of line still exists at the Botley end. I remember walking this in about 1970, it was a real surprise to find it there. It was about 400 metres of so and overgrown with small trees in places! This section has since been restored as a siding for Foster Yeoman aggregate trains, and has even been doubled in recent times. The rest of the route beyond is basically intact but very overgrown in places.

There was a scheme to build a narrow gauge line along most of the route in 1964, but this didn't reach an advanced stage.
Posted by Steve Sainsbury at 14:47 No comments: