Carnival of Trains - The Rise and Fall of Saltair, Utah 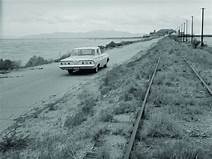 I was watching a low budget horror film the other day, Carnival of Souls, made in 1962 on a budget of just $34,000. Part of it was filmed in Kansas but a key element of the film was an abandoned resort at the end of a causeway in Utah.

The intriguing thing was what seemed to be an abandoned railway or perhaps interurban that seemed to run to the resort. In 1962 the track was still in place.

A little bit of research on line revealed that this was Saltair on the Great Salk Lake in Utah, USA.

The abandoned amusement park that is reached by a causeway clearly inspired the filmmaker, Herk Harvey, and the film grew out of its strange atmosphere. The location is revisited several times by the main protaganist in the film. Already abandoned in 1962 the whole place burned down just eight years later. At one time Saltair was the location of the world's largest dancefloor.

The resort opened in 1893 and, being owned by pragmatic Mormons it was advertised as a wholesome alternative to the more earthy parks further east, like Coney Island in New York. One of the main attractions was that the water was warm and salty, and it was impossible to sink! The first Saltair burned down in 1925. 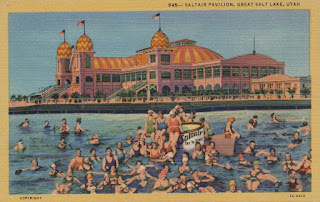 A second pavilion was quickly built, although it too suffered fire damage in 1931. In 1933 the lake began to recede, leaving Saltair somewhat high and dry, reducing its appeal to bathers. To make up for the loss of patronage due to the low water levels, a roller coaster was constructed, as well as a short railroad from the pavilion to the water using gasoline-powered speeders to carry patrons across the brine flat. Other things that slowly reduced Saltair's popularity were the growth of cinema, cars and eventually television, drawing visitors away. The pavilion closed during world war two, being left to the heat, cold and salt.

A third pavilion was built in 1981, but continued to be plagued by the familiar problems of flooding and receding waters. Nowadays it is used exclusively as a venue for rock concerts.

If you're still with me this is where the railway part comes in!

Even before the resort opened a railway company was incorporated on 6 September 1891 to tap the tourist market at Saltair Beach Resort. The Saltair Railway quickly changed its name to Salt Lake and Los Angeles Railroad in April 1892, then renamed the Salt Lake, Garfield and Western Railway. Passengers were carried to Saltair and freight to the mines around Garfield and the salt industry run by Morton Salt. The Saltair Resort was opened on 8 June 1893 and for many years this was the main source of passenger revenue. Electrification of the line commenced in 1916 and was completed in 1919.

At its peak the Saltair route carried 12-16 passenger car trains every 45 minutes. 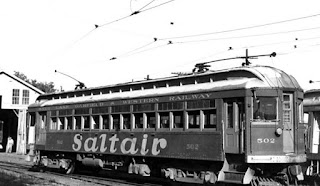 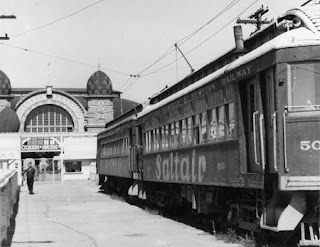 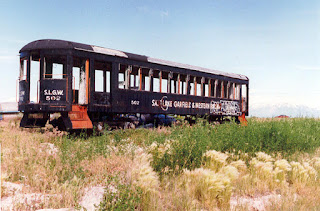 The resort finally closed permanently in 1959, at which point the Salt Lake, Garfield & Western ceased passenger operations. The first diesel locomotive on the line was purchased in 1951, and was a GE 44-tonner. In July 1954 the railroad leased a GE centercab diesel from U.S. Steel, and this marked the end of all electric operations on the Salt Lake, Garfield & Western. The SLGW continues to haul freight to this day along its 16 miles of track with additional sidings for railcar storage, transloading, railcar cleaning rail served warehousing and other rail-related services.

The line was unusual in that its main purpose was to serve a single, man made attraction. So the railway was vulnerable for this reason, its fortunes mirroring those of the attraction it was built to serve. The only similar set up I can think of, though I'm sure there are many more worldwide, was the line from Brighton to Devil's Dyke, in Sussex. 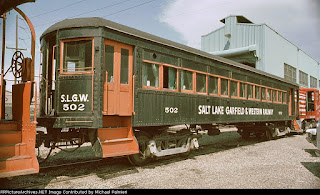 A final note, perhaps in keeping with the whole bittersweet story. In 1963 the SLGW decided to run a final, open air train down the Saltair line, a way for locals and railfans to say goodbye to the line. In extreme contrast to the glory days between the wars, only about a dozen people showed up ...

To finish, on a brighter note! 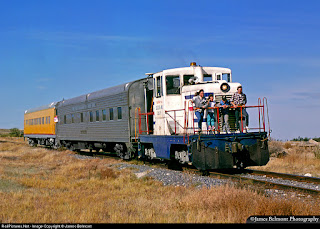 A Salt Lake Garfield & Western passenger special rambles slowly through the salt grass near the Salt Lake International Airport. The SLGW ran passenger specials every fall when model train shows were held at the Utah State Fairpark. The SLGW is a family owned operation, and the owner Don Hogle was happy to let folks ride on the pilot of their 44 ton GE. It appears the kids are having a terrific time riding the D.S.5.

Posted by Steve Sainsbury at 08:09