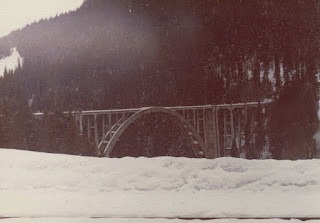 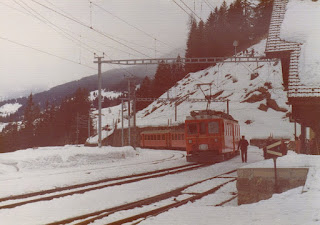 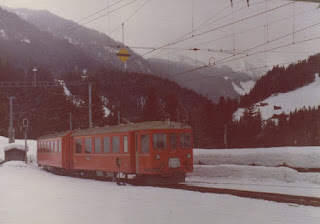 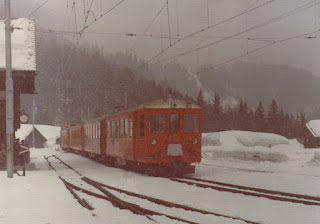 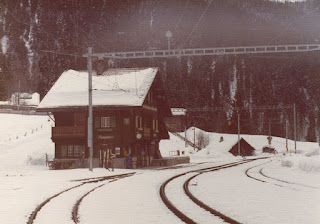 (All 17.2.1977)
This is Langwies on the Arosa branch of the Rhatische Bahn in Switzerland. The stations on this branch are all classic Swiss chalet style, the main reason I left the train here was to get a shot of the Langwies bridge (top), which is well known in Switzerland.
It was cold and snowy and I was glad to get back on the train!
This is one of the things that we enthiusiasts do that the civilians don't - have these odd moments when we end up somewhere strange and randon, for no real reason, engage with the place for a few minutes then move on. If we do take photos then we freeze the moment for ever.
Posted by Steve Sainsbury at 10:47 No comments: 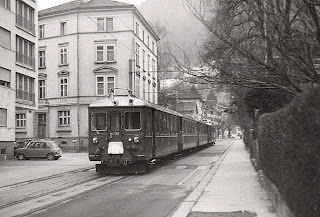 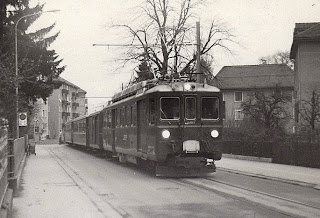 Down in south eatern Switzerland is the big metre gauge Rhatische Bahn, a network of narrow gauge routes that have a monopoly in Switzerland's largest and most sparsely-populated canton of Grisons. There are main routes between Chur and St Moritz, the Davos loop, the long branch to Schoul-Tarasp, the fantastic Bernina Railway and another branch from Chur to Disentis which has an end on junction with the former Furka-Overalp Railway, which eventually ends up in Zermatt in the west of Switzerland. There is also a very new route the Vereina railway which links the Davos loop to the Scoul-Tarasp line through a VERY long tunnel. ALL Rhatische Bahn lines are very scenic.

There's one other line which is the self-contained branch to Arosa. This departs from its own station complex in Chur and immediately uses a street running section to the outskirts of the city, it then plunges into a short tunnel and continues as a normal railway to the smart resort of Arosa.

This was my first sight of long passenger trains running on street (other than on the Weymouth Tramway) and was very intriguing. A fair amount of street running has been eliminated in Switzerland since 1977 but this particular stretch is not only still going strong but has in fact since  been doubled! Well worth a visit!
Posted by Steve Sainsbury at 13:51 No comments: