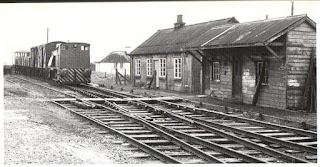 A line which always fascinated me was the Cleobury Mortimer and Ditton Priors Light Railway, a long title for a small line! The mix of pannier tanks with their smoke arrestors, the fact the line stayed open in part until as late as 1965 and its rural location gave it a unique character for a British Light Railway.

In its final years it operated as a military line linking a number of ordnance depots hence the spark arrestors on the steam locos.

Not a lot of the line survives thanks to its route with few earthworks and small, low platformed stations.

The Cleobury Mortimer and Ditton Priors Light Railway was a pre-grouping railway company that served part of south Shropshire.
Everard Calthrop was appointed Consulting Engineer in 1900, responsible for surveying the route and preparing the construction plans, and the line opened in 1908. The line had a junction with the Wyre Forest line of the Great Western Railway (GWR) at Cleobury Mortimer and was absorbed into the GWR in 1922.
After 30 years of passengers services, the line closed just before the start of World War II.
The line was then used by the Royal Navy which had a Royal Naval Armaments Depot (RNAD) at the end of line at RNAD Ditton Priors. The railway finally closed in 1960.

Cleobury Mortimer - Cleobury Town - Stottesdon - Burwarton - Ditton Priors. An extension was proposed, running east from Stottesdon to Billingsley. Three possible extensions were proposed from Ditton Priors: east to Bridgnorth; north east to Coalport; north to Presthope (near Much Wenlock). None of the extensions was actually built.

The line had two locomotives, both 0-6-0 saddle tanks built by Manning Wardle and these became GWR numbers 28 and 29. They were rebuilt by the GWR with new boilers andpannier tanks, after which they bore a strong resemblance to the GWR 1366 Class. Other locomotives used on the line included GWR 2021 Class nos. 2101 and 2144 and GWR 1600 Class no. 1661.
Following the opening of the RNAD at Ditton Priors, the steam locomotives were fitted with spark arrestors but, after the arrival of RNAD diesel locomotives, they did not enter the armaments depot. The steam locomotive was taken off the goods train at Cleobury North (just south of Ditton Priors) and the wagons were drawn into the depot by an RNAD diesel locomotive.
Three "flameproof" diesel locomotives of 165 bhp were supplied to RNAD Ditton Priors by Ruston and Hornsby between 1952 and 1955. A similar machine Francis Baily of Thatcham (ex-RAF Welford) is preserved at Southall Railway Centre. Before the Rustons, a Planet diesel locomotive is believed to have been used but its dates of arrival and departure are not known.

The depot, which had 25 magazines and four stores for naval mines, opened in 1941 around Brown Clee Hill. The buildings were camouflaged and served by rail sidings. Trains and their dangerous cargo could then be loaded and unloaded inside.
In 1960 the railway line was finally closed but the Royal Navy continued to use Ditton Priors until 1965. The following year the depot was taken over by US forces that had left France following the French withdrawal from NATO's military structure.
The depot finally closed in 1968.

Parts of the site are now occupied by an industrial estate and fireworks factory. Many of the original buildings have new uses.
Land adjacent to the defunct railway line was sold off by the MOD in 1971. Ten farms have been created in this area.

Posted by Steve Sainsbury at 05:31 No comments: