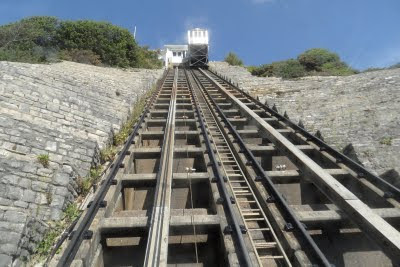 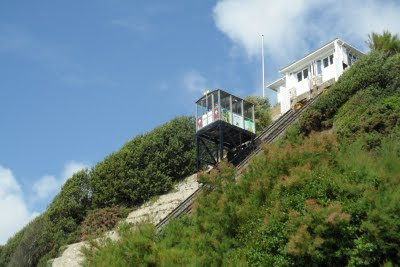 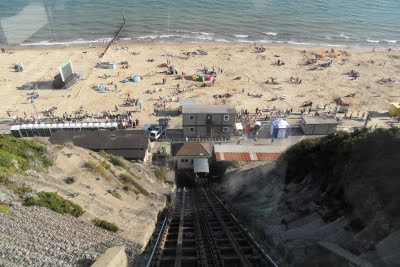 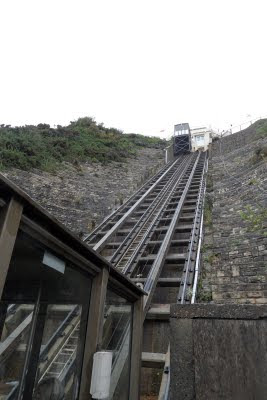 
Bournemouth has apparently got three cliff lifts - a couple of weekends ago we used two of them. Both are very similar and have the same ownership. They both seemed fairly busy even though they are quite short.

I like funiculars, they are fun but also serve a very useful purpose. My favourite is probably the Great Orme Tramway, Switzerland also has some very spectacular (and long) ones, though there are a lot there I haven't yet used.
Posted by Steve Sainsbury at 12:32 No comments: 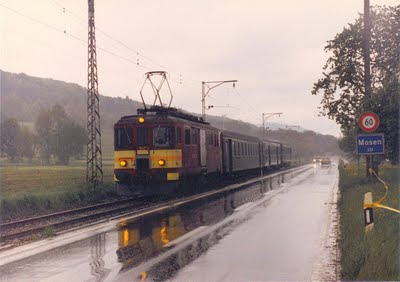 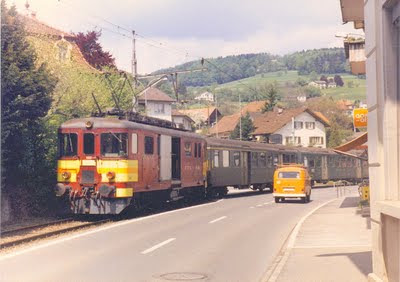 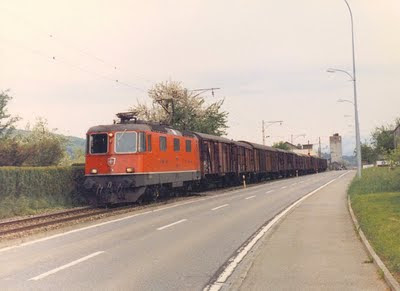 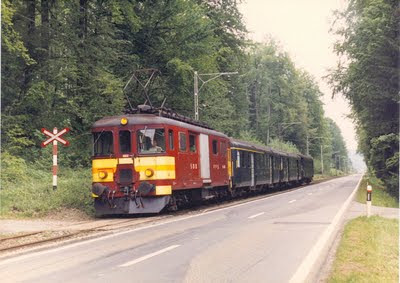 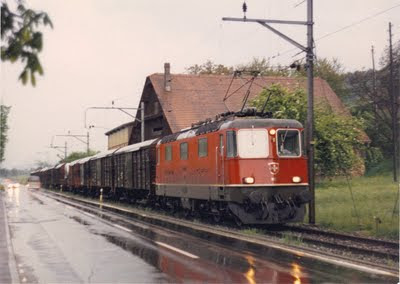 The Seetalbahn is a fantastic 30 mile long roadside tramway that is part of the standard gauge national network (SBB). These shots are of the line in 1987, there has been much modernisation since, the line now uses ultra modern tram style trains.

In 1987 as well as passenger traffic there was a lot of freight, most seemingly originating along the route, including pick up freights.

Parts of the line have now been relocated on reservation so the roadside mileage is decreasing, which is a shame as the photo opportunities were fantastic.

The line runs from Luzern to Lenzburg, in Cantons Luzern and Aargau.

Posted by Steve Sainsbury at 07:28 No comments:

will the cuckoo make a comeback? 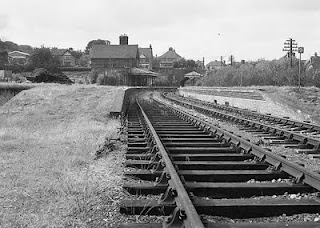 In retrospect this was a particularly stupid closure. Hailsham is far too large to not have a railway service and is certainly paying for it now! But the line also provided an excellent alternative route from Eastbourne to London, and also served several other small towns en route. It may well be sooner rather than later that reopening of this route takes place, for the reasons listed abiove, and also because of the coming revival of British seaside resorts as more and more people choose to holiday at home rather than bear the strain (and soon prohibitive cost!) of flying to more exotic destinations. One of the big advantages of this route is that it will take some of the pressure off the current sole connection between Eastbourne and London (via Lewes and Haywards Heath) which becomes particularly congested where it joins the Brighton to London line.

Generally the closure of rail routes to British seaside resorts in the 1960s was clearly a huge mistake. It is barely believable that important seaside towns such as Ilfracombe, Bude, Padstow, Lyme Regis and a host of others are currently struggling with roads (LOL!) instead of having modern transport drop thousands of visitors on their doorsteps. This will have to change, and fast!

Horam railway station was on the Cuckoo Line between Hellingly and Heathfield, serving the village of Horam.

The station was opened by the London, Brighton and South Coast Railway on 5 April 1880 and was originally named Horeham Road for Waldron. It was on the line extension from Hailsham to Eridge. It was renamed several times: on 1 June 1890 it became Horeham Road and Waldron; on 1 April 1900Waldron and Horeham Road; on 1 January 1935 Waldron and Horam; and it finally became Horam on 21 September 1953.
The station closed to passenger traffic on 14 June 1965 but freight trains continued to pass through until 1968 when the line was closed completely.

The Cuckoo Trail foot and cycle path runs over one of the platforms. Sections of the two platforms including a concrete nameboard,some lamp posts and seats are preserved. The rest of the station site is now a housing estate and a car park.

More info on the Cuckoo Line (from Wikipedia)

The Cuckoo Line is an informal name for the now defunct railway service which linked Polegate and Eridge in East Sussex, England, from 1880 to 1968. It was nicknamed the Cuckoo Line by drivers, from a tradition observed at the annual fair at Heathfield, a station on the route. At the fair, which was held each April, a lady would release a cuckoo from a basket, it being supposedly the 'first cuckoo of spring'. The railway line served the following Sussex communities: Polegate, Hailsham, Hellingly, Horam for Waldron, Heathfield, Mayfield, Rotherfield and Eridge. Services continued through Eridge and onward via Groombridge to Tunbridge Wells.
The Hailsham-Eridge section closed in 1965, the Polegate-Hailsham branch surviving until 1968. Eridge-Tunbridge Wells closed in 1985, and this line has been resurrected as the Spa Valley Railway.

The Cuckoo Line was built by the London Brighton and South Coast Railway (LB&SCR) in two sections, starting with the branch from Polegate to Hailsham which opened to traffic on 14 May 1849. The remainder of the line to Eridge was engineered by Frederick Banister, and opened to traffic in September 1880.[5] The station buildings were designed by Banister's son-in-law, Thomas Myres.
The line from Three Bridges to Tunbridge Wells (via East Grinstead High Level and Groombridge) opened on 1 October 1866, with the connecting line from Uckfield via Eridge opening on 3 August 1868. The final part of the route opened on 1 February 1876: a connection between the LBSCR station at Tunbridge Wells West and Tunbridge Wells Central, the station operated by the South Eastern Railway (SER). This single-line section passed through the short Grove Tunnel to Grove Junction, sited a little south of the SER station on its Hastings Line. In 1881 a new track alignment was built between Polegate and Hailsham allowing trains to run into Polegate at the west end of the station and direct to Eastbourne.
At the 'Grouping' in 1923, the railway passed into the control of the Southern Railway. When the Southern Railway was nationalised in 1948, the line became part of the Southern Region of British Railways.
Following the Beeching Report in 1963, the line was recommended for closure. The section from Eridge to Hailsham was closed to passenger traffic in 1965 (the section between Heathfield and Hailsham remaining open for freight until 1968), whilst the short branch from Polegate to Hailsham remained open until 8 September 1968. The closure of this section was hotly disputed – even British Railways itself agreeing that Hailsham was a growing town and that buses would be unable to cope with the demands of the increasing population.
The line between Eridge and Tunbridge Wells West remained open until 1985. Despite having survived 'Beeching', no money was spent on the line and British Rail regarded a track and signalling upgrade to be unviable. Closure was announced in February 1985, and the last passenger trains ran on 6 July 1985. Grove Junction was removed the day after closure, but the depot at Tunbridge Wells West remained in use for another month.

See also: Spa Valley Railway
Today, the Cuckoo Line remains a closed railway – a footpath and cycleway known as The Cuckoo Trail runs along much of the route from Polegate to Heathfield. Polegate retains a railway station, albeit on a different site to that formerly used by Cuckoo Line trains, whilst the site of the station in Hailsham is now occupied by a housing estate and a public car park. Hellingly station survives as a private residence. At Horam the platforms are preserved including a nameboard. Heathfield station building is now a shop selling kitchen utensils but the site of the platforms is now occupied by industrial units. At Mayfield the station building survives as a private residence but the trackbed has now been removed and replaced by the A267 Mayfield bypass. Rotherfield and Mark Cross station is a private residence. Soon after closure of the Eridge to Tunbridge Wells West section, a preservation society was formed with the intention of reinstating the passenger service on the line. The Tunbridge Wells and Eridge Railway Preservation Society (TWERPS) acquired the line in March 1996 and by December 1996 had started to run a steam-hauled passenger service along part of the route. The line has been marketed as the Spa Valley Railway and it has gradually extended services with the final section to Eridge opening on the 25th of March 2011.

Cuckoo Trail between Polegate and Hailsham

D1 Class No. 297 Bonchurchand train, derailed at Tooth's Bank, North of Heathfield, September 1897.
The line had a good safety record: there was only one reported accident on the line. On 1 September 1897 at Tooth's Bank, 2 miles north of Heathfield, the 08:18am service from Eastbourne was running around 4 minutes late and was trying to pick up time in order to meet a connecting train at Groombridge. As the train entered the curve at around 40 mph it left the tracks. Driver James McKinlay was killed and Fireman Lewis Minns seriously injured, whilst 30 passengers suffered minor injuries. At the subsequent inquiry, Lt. Col. G. W. Addison reported that the main cause of the accident was excessive speed as the driver was attempting to make up lost time in order to make a connection at Groombridge. The track itself was in poor shape with many rotten sleepers and "curves having irregular elevation" which contributed to the accident. Following the inquiry, much of the track was relaid and the train scheduling was altered.
In April 1968 a lorry collided with a low road bridge under the line at Horsebridge north of Hailsham damaging the bridge causing immediate closure of the line. As the freight train service between Hailsham and Heathfield was due to be withdrawn the following month it was not considered worthwhile repairing the bridge so the line was prematurely abandoned forthwith. Some wagons isolated at Heathfield goods yard were cut up on site.

The Cuckoo Line diverged from the main Eastbourne to London line at Polegate, and ran northwards on a single track to the market town of Hailsham, which was the terminus for 31 years until the line through to Eridge had been completed. The line then passed through the villages of Hellingly (where a link to the Hellingly Hospital Railway joined the route, worked by overhead electric traction), Horam, Heathfield, Mayfield, Rotherfield & Mark Cross, then via Redgate Mill Junction to join theOxted Line for Eridge. The route continued north-eastwards, leaving the Oxted Line at Birchden Junction heading for Groombridge, High Rocks Halt and eventually Tunbridge Wells West. Through trains could continue on the single-track connection through Grove Tunnel to join the Hastings Line (heading towards Tunbridge Wells Central) at Grove Junction.

Horam station was originally built as Horeham Road. In 1900 it was renamed Waldron & Horeham Road. Over the years, Horeham changed to Horam as the hamlet grew around the station, prompted by growth including an Express Dairies depot, and the name changed again in 1935, before becoming simply Horam in September 1953.
Posted by Steve Sainsbury at 08:37 2 comments: