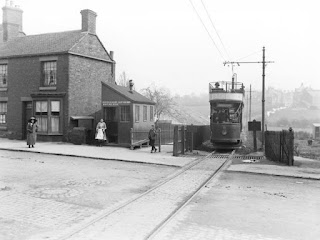 Newhall is a town between Swadlincote and Buton on Trent with a population of around 7400. 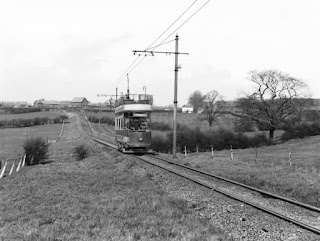 A tram bound for Ashby on the Burton & Ashby Light Railway, at Stanhope Bretby in April 1913. This tramline was owned and built by the Midland Railway in 1905-1906. Copyright National Railway Museum. 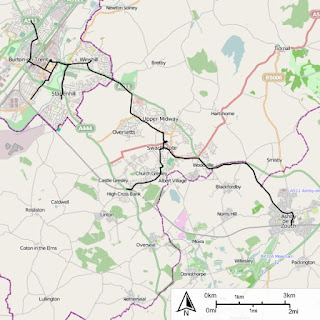 Map of the route (including Burton tram network)

When you look back on the transport options our ancestors had it is remarkable! This was a fantastic urban and interurban network that should still be with us today, but it closed as long ago as 1927, just 21 years after opening. A hundred years ago the area was served by electric trams every TEN minutes, today nothing!

More info (from Wikipedia)
The Burton and Ashby Light Railway was a tramway system operating between Burton upon Trent and Ashby de la Zouche between 1906 and 1927.

The tramway opened on 2 July 1906 and was operated by the Midland Railway. The system used the tracks of the Burton upon Trent Corporation Tramways from a terminus by the Town Hall in Wellington Street through Station Street, Borough Road and Guild Street before using its own infrastructure through Swadlincote to Ashby de la Zouche. There was a branch from Swadlincote and Woodville to Gresley railway station at Church Gresley which opened on 24 September 1906.
The journey time from Ashby de la Zouche to the terminus in Burton on Trent was a minimum of 64 minutes and a 10-minute interval service was offered, requiring 17 vehicles.
One unusual feature of the line was the Swadlincote power house which was fitted with two 240 brake horsepower (180 kW) diesel engines, rather than the more traditional steam power. The adjacent depot could accommodate a total of 24 trams but the company only ever owned 20.
The Brush Electric Company of Loughborough provided the open top tramcars. Each had two 25 horsepower (19 kW) Westinghouse 80 motors and capacity for 51 passengers. The livery was Crimson Lake and white with a Midland crest. When the company was taken over by the London Midland and Scottish Railway in 1923, the cars were repainted.
The system was taken over by the London, Midland and Scottish Railway company when it absorbed the Midland Railway in 1923, and the system was closed on 19 February 1927.
At closure, 3 cars were sold to the Tynemouth and District Electric Traction Company and the remaining 10 sold locally for domestic or rural use.

Car No 14 was eventually transported to Detroit where it operated on a heritage trolley line from 1976 until closure in 2003. It is believed to be in storage at aDetroit Department of Transportation facility as of 2012.
In October 2014 Car No 14 was put up for sale by the City of Detroit, and the tram was repatriated to the United Kingdom, and is now stored at the Statfold Barn Railway.

Posted by Steve Sainsbury at 04:51