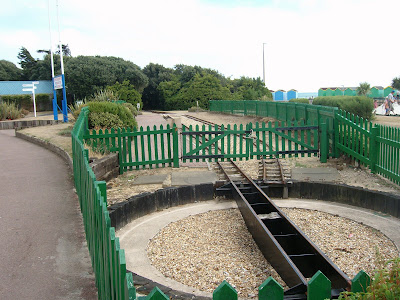 Littlehampton Miniature Railway is under threat. The council want to throw the current tenant off the line and rip up the track. The LMR is part of my childhood as I was raised here. It was steam worked right up to the 1970s. It was also of a unique gauge (12¼"), being 2" wider than the more normal 10¼" gauge. It even had engines from the ill-fated Surrey Border and Camberley Railway running on it when I was a kid.

As a teenager I got wildly drunk and walked the whole length of the line at about two in the morning!

I have got photos (somewhere) of the diversion of the line from the early seventies when the new sewage works was being built.

In the 80s there was a serious proposal to extend the line along the prom to Smarts' Amusements, bringing it to the centre of the resort. The line was actually extended about 50 metres, as shown in the pic above. The original Norfolk Road station was in the bushes in the background.

What I've suggested is to set up a preservation society and propose this extension to the river again. This would give Littlehampton a superb 2 mile line serving a real transport need.

There's an excellent Facebook group set up for this line. Please join!

Posted by Steve Sainsbury at 12:53