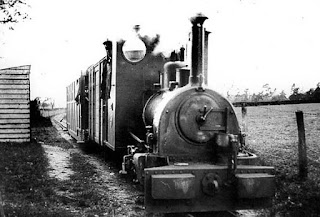 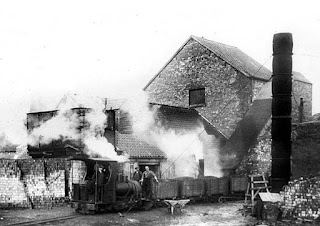 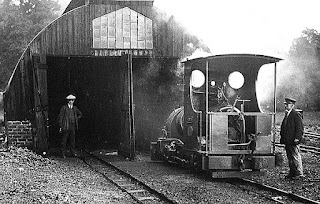 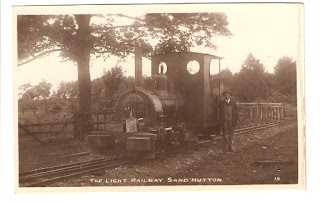 (All pics sourced via the Internet)

The Sand Hutton Light Railway was an 18" gauge estate railway built on the principles developed by Sir Arthur Heywood. It replaced an earlier 15" gauge miniature railway. It connected the estate's main house with Warthill station on the LNER, and the village of Bossall.

The planned full length of the line was 7¾ miles (12.5km), the original miniature line being replaced and extended between 1920 and 1923 using materials obtained from the line at the Deptford Meat Depot in London, which has a standard gauge link and an 18" internal network.

The line ran from Warthill station to Kissthorn's Siding near the main hall, with a substantial branch serving a brickworks at Claxton. In 1923 the main line was extended to Bossall, with a further branch to Barnby being added around the same time.

The original light railway order included a half mile extension to Scrayingham but this was not built, promarily because it would have involved the construction of a large and expensive bridge across the river Derwent. This brought the total length of the built line to 5¼ miles (8.4km).

Principal traffic on the line was agricultural produce from farms on the estate together with coal to the brickworks and bricks from them. Almost all of this traffic was carried through the transfer sidings at Warthill station.

The line also carried passenger traffic between 1924 and 1930, for personnel and visitors to the estate.
The Claxton brickworks closed in 1929, the line's promoter and benefactor Sir Robert Walker died in 1930, the line closed completely in June 1932 and was dismantled by 1933.

The line employed four Hunslet steam locomotives, numbers 4 (Esme), 10, 11 and 12. These all came from the meat depot at Deptford, and all were scrapped shortly after the line closed. 75 wagons were acquired from the meat depot, all built in May 1915, together with 1 (possibly) two brakevans. At least one survived until the 1960s though its fate is unclear.

There was also one passenger coach, built new for the line in 1924 by Robert Hudson of Leeds. This seated 30 people and was very long for so narrow a gauge (31 feet 3 inches). This coach still exists, though not without some risky adventures in the past, having been a cricket pavilion at one time and also being stored outside for many years on the Lincolnshire Coast Railway (earlier incarnation), it now survives at that line's new base near Skegness.