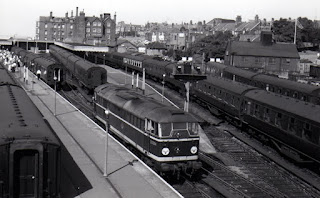 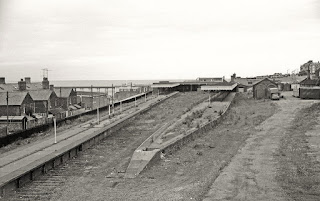 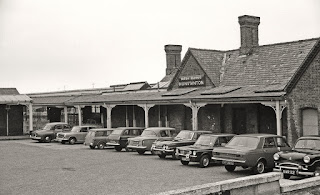 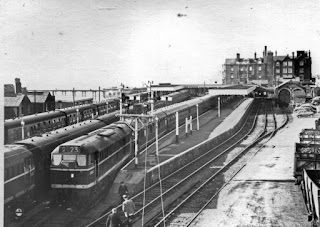 (All pics sourced via the Internet)

The British seaside town was one of the biggest victims of the Beeching cuts, as many seaside resorts were served by branch lines rather than stations on main lines. There was a synergy between closing lines and a more affluent Britain falling in love with resorts overseas (or more precisely the weather of resorts overseas!) This all took place in the 1960s and 1970s, and there was wholesale destruction of lines to seaside resorts in this period. Even quite large resorts were not immune to this process despite retaining a reasonably healthy trade - Ilfracombe, Bude, Swanage, Minehead and many others all fell victim to this carnage.

One victim was Hunstanton, but this wasn't a Beeching cut. Like the Swanage branch it was a step beyond Beeching, he'd recommended the branch remain. But a process of running down the route, coupled with the structural issues outlined above, left it stranded as a long siding, serving a town that could no longer compete with Benidorm or Majorca. Even the presence of the royal station at Wolferton wasn't enough to keep the line running. On 5 May 1969 the line closed completely, making Hunstanton just one more run down seaside resort lacking a vital amenity.

The line originally opened in 1862, and Hunstanton station was built to handle the big crowds that soon flocked to the town, almost all being brought in by train.There were two very long island platforms to handle the traffic, at its peak (always on a Sunday) there were trains every ten minutes.
Passenger traffic reached its peak in the mid fifties, as Britain boomed after the war ended, and before most families had acquired a car. The line closed to freight traffic in 1964. Most through services to Liverpool Street ceased in 1959, leaving just a basic shuttle service on the line between King's Lynn and Hunstanton. A few through trains struggled on, in 1966 these had been reduced to one working on weekdays with two up and one down on summer Saturdays. The line was singled on 2 March 1967, this was the death knell for through trains as just about all sidings were also removed. With the line looking more run down and services less and less attractive ridership continued to fall. The line closed for the sake of just £40,000, the loss in its last year of operation, with no attempts made to increase traffic or utilise the line's resources.

Nearly 50 years on the world has changed. British seaside resorts are experiencing something of a revival, based around short stays rather than week or two week holidays. Seaside resorts with a train service have an automatic advantage over rail-less resorts - you can avoid the traffic jams commonplace near seaside resorts as everyone tries to get in at the same time on the same road. Add steam like at Swanage and Minehead and the attraction of a community/heritage line is plain for all to see. Community line first of course, as the purely heritage business model is likely to suffer in the future for many reasons!

There has always been some demand for the line to Hunstanton to return, and for all the usual reasons. So, thanks to a lot of demands, I've set up a Reversing Beeching group just for the line. This will allow interested parties to look at ways of getting the line back. Now a Reversing Beeching group is just that, a Facebook point of contact. It doesn't claim to be a preservation society or anything else. But that CAN grow out of a Facebook group, as Combe Rail has down in Ilfracombe. So if you want t help get things rolling at Hunstanton as a first step why not join and get involved? This is a line through flat country with few engineering works. The demand for the line is already there, even Beeching recognised this all those years ago!

Posted by Steve Sainsbury at 04:14