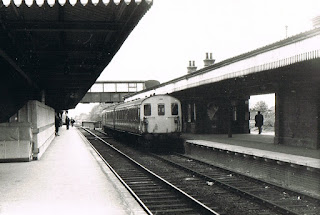 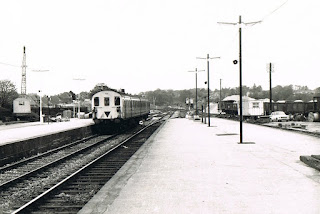 Back in 1973 Fareham always seemed quite exotic with its 100% diesel services, a far cry from our near 100% electric services 40 miles to the east in Littlehampton!

I visited regularly on Rover tickets and often changed here for the shuttle train to Eastleigh, where there were plenty of photographic opportunities.

The station still reeked of a steam atmosphere back then, I don't remember there being a buffet service on the platform but I may be wrong!

On 13 May 1973 I was returning from the Eastleigh Depot Open Day and managed just these two shots of Thumper 1121 on the shuttle to Eastleigh before catching my train east.

Fareham station was first opened by the London and South Western Railway (LSWR) in 1841 on the line from Eastleigh to Gosport. Later additions connected Fareham station with Southampton, Portsmouth and along the coast towards Brighton. These later lines are now the most valuable, but as a consequence of the later construction there is a sharp curve upon exiting the station to Portsmouth, and a lesser one towards Southampton. A 20 mph speed limit protects the area surrounding Fareham station, mainly due to the sharp curve on the Portsmouth side. The original line, now singled through Fareham Tunnel, to Eastleigh and London, is dead straight, as is the former Gosport route, which closed to passengers in 1953. Track remains overgrown in places on the Gosport route, although most of it has now been cleared for a potential Fareham to Gosport express link in the future. The line formerly saw freight services to a Royal Navy ordnance factory at Bedenham into the 1990s, but the pointwork connecting it to the main line has been lifted in recent years.
There was also a line to Alton via the Meon Valley, branching from the Eastleigh route at Knowle, north of the tunnel. It was built initially as a fast route to the Isle of Wight - to express standards though only a single line on double track earthworks - at a time when Stokes Bay, not Portsmouth Harbour, was the primary rail-connected ferry terminus for the Island. That route closed to passengers in 1955.

Stopping trains cross at Fareham in 1955
In the early 21st century a new footbridge and lifts were erected to the north of the station buildings and canopies. The lifts allows the station to comply with the Equality Act 2010, providing wheelchair access to all platforms. Related work has included fitting tactile strips to all three platforms. Work commenced in October 2008 and was undertaken by Osborne Rail Division. The ticket office was reopened with a new entrance to the platform at the south end of the corridor. Ticket barriers were also installed and a new station shop constructed at the end of the station building on Platform 3.

Fareham station is located on the West Coastway Line which runs between Brighton and Southampton Central. It is now served by South West Trains, Southern and First Great Western.
Fareham station has regular services to London Waterloo, London Victoria (a much longer route to London via Gatwick Airport), Brighton, Portsmouth Harbour, and Southampton Central. There are also long-distance services to Cardiff Central via Bristol Temple Meads.
The station has three platforms:
Platform 1 is the main up platform and serves Southampton Central, Cardiff Central and London Waterloo via Winchester and Basingstoke.
Platform 2 is a bay platform and has very little planned use, however it is periodically used when late running FGW and SN services are terminated short of destination, and during engineering works. It was formerly the main up platform, before the stone arched bridge over the A27 immediately south of the station was replaced, and the opportunity taken to ease the radius of the curve from Portsmouth by aligning the route into the current platform 1.
Platform 3 is the down platform for services towards Portsmouth Harbour, Brighton and London Victoria. The bay platform for services to Alton via the closed Meon Valley Line was on the opposite (car park) side of this platform, a short siding is all that remains at the north end of platform 3.

A 1910 Railway Clearing House map of lines around Fareham railway station
The typical weekday off-peak service is as follows:
Posted by Steve Sainsbury at 11:19