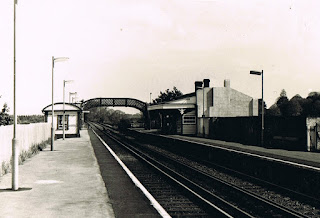 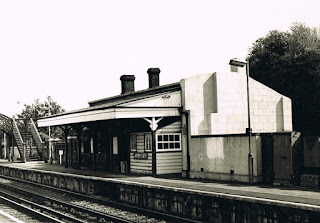 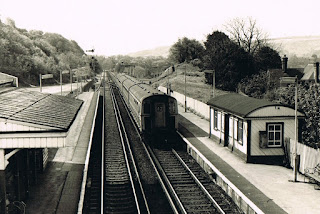 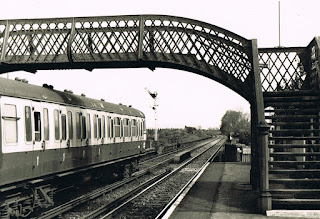 When I was growing up in Littlehampton in the 60s and 70s we had two ways of getting to London - on the semi-fasts via Hove and Haywards Heath, or on the more direct (if slightly slower) Mid Sussex route. Whenever I could I chose the Mid Sussex. It runs through lovely Sussex countryside on the stretch between Arundel and Pulborough, with the Downs visible the whole time. And about midway is the station at Amberley (actually in Houghton). Now better known as the home of the Amberley Museum back in 1977 when these photos were taken there was little more than a tea room near the station.

The station has changed a bit - it was affected by a fire, the trains have changed and there's no longer a signalbox! But the views are still there - and of course you've a great reason to go now as it's the best way to get to the museum, which has a working narrow gauge railway as well as many other transport related exhibits.

Amberley railway station is a railway station in West Sussex, England. It serves the village of Amberley, about half a mile away, and was opened by the London, Brighton and South Coast Railway. The Amberley Working Museum – a museum of industry – is accessed from the former station goods yard.
The station is 55 miles (89 km) south of London Victoria railway station on the Arun Valley Line.

Opened by the London, Brighton and South Coast Railway, it became part of the Southern Railway during the Grouping of 1923. The station then passed on to the Southern Region of British Railways on nationalisation in 1948.
When Sectorisation was introduced in the 1980s, the station was served by Network SouthEast until the Privatisation of British Railways.
A signalbox is situated on Platform 2 under the station canopy.

There is an hourly service in each direction, northbound to London Victoria and southbound to Bognor Regis.
All trains are operated by Southern, usually using Class 377 trains.

Posted by Steve Sainsbury at 14:52