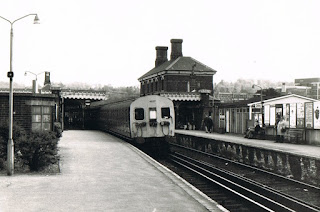 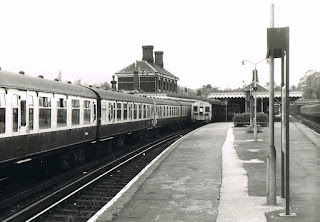 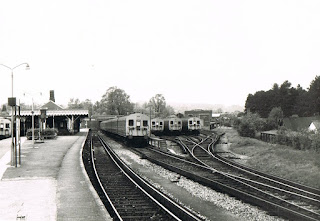 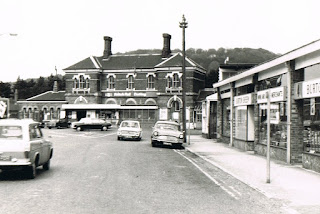 As a kid I was often driven up to London and always looked out around Dorking for trains as the railway from Horsham through Warnham to Dorking was visible as you approached Dorking and, intriguingly, a second line crossed the road almost where Dorking station was. I never once saw a train crossing that line, but saw a few working their way up through Boxhill (which always seemed a strange place to have a station).

Into the 70s I was getting around on my own, by train of course. Back in 1973 I finally got to visit the station at Dorking, which I then knew was just one of three stations that served Dorking. It was full of boring slam doors of course - that's how we thought about them back then! The station itself was quite a large and attractive building and had a mix of suburban and through trains. The line south to Horsham was lightly used back then with some interesting intermediate stations.

A short walk took me to that other line, the one which crossed the A24 rather than paralleled it. I knew by 1973 that it was a dieselised cross country route between Reading and Tonbridge with some interesting cross-regional traffic. Just as I climbed the stairs and had taken my first shot of the station a coupled pair of class 33s came through. I was about eight years too late for steam but back then diesels were almost as big a treat! 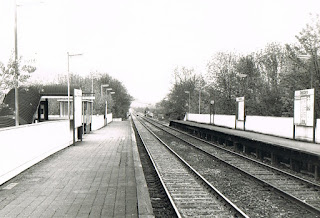 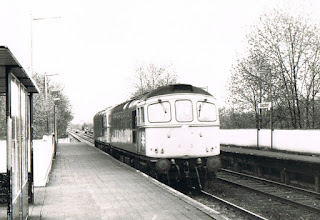 Dorking railway station is one of three railway stations that serve the town of Dorking in Surrey, England. The station is within walking distance of Dorking Deepdene station and interchange on a through ticket is permitted. Dorking West and Dorking (Deepdene) are located on the North Downs Line.
There are 2 trains per hour (tph) towards London Waterloo, 2tph towards London Victoria and an hourly service to Horsham(Monday to Saturday off-peak). South West Trains services to London Waterloo typically use Platform 2. Southern services to Horsham generally depart from platform 3.
The station which was previously called Dorking North was rebuilt during the 1980s and is now part of the same office block which houses the headquarters of Biwater.
Ticket barriers were installed in 2010.

The Mole Gap between Dorking and Leatherhead is one of the few natural breaches in the North Downs and its potential as a rail corridor was realised as early as 1830 when a line linking London to Brighton was proposed. In 1845-6, the "Direct London and Portsmouth Railway" was authorised by parliament to run south from Epsom to Dorking on to Godalming, Havant and Portsmouth. The scheme failed to attract sufficient investment and was dropped in favour of the Woking, Guildford and Havant route fromLondon Waterloo.
The first railway line to link Dorking with London was the independently promoted "Reading, Guildford and Reigate Railway" proposed in 1845-6, authorised by Acts of Parliament in 1846 and 1847. This became the line we know today as the North Downs Line.
By 1859 the LBSCR and LSWR had built a joint line to Leatherhead from Epsom where their tracks separated (the former heading for London Bridge the latter for London Waterloo. An independent Horsham, Dorking and Leatherhead Railway was set up and promoted by interested local parties (principally from Horsham) to link the three towns. The railway was approved by Act of Parliament in July 1862, but only from a junction with the North Downs Line, 100 yards (91 m) to the east of Dorking Deepdene, to the Arun Valley Line at Horsham.
A year later in July 1863 LBSCR secured authority to build the line from its station at Leatherhead to make a connection with the line from Horsham. The line to Leatherhead was opened on 11 March 1867, however the connection with the line from Horsham was not made until 1 May 1867. Initially services ran from London Bridge to Brighton via Sutton and Steyning four times per day in each direction.

The Southern Railway, formed in 1923, began an extensive programme of electrification of their suburban lines. The line from Waterloo to Dorking was electrified using the 660V third rail system in 1925 and regular half-hourly semi-fast services were introduced on 12 July 1925 to run seven days per week. The 22.5 mi (36.2 km) journey to Waterloo originally took 45 minutes, although this was considerably lengthened when trains began to stop at all stations shortly afterwards. An additional hourly electric service to London Bridge via Mitcham Junction and Tulse Hill began on 3 March 1929; the 25 mi (40 km) journey took 53 minutes.
The mid-Sussex electrification of 1938 resulted in the express steam services from Victoria being replaced by electric services which were routed through Dorking. These gave commuters from Dorking their fastest ever link to Victoria (34 minutes during peak hours). In the timetable change of May 1978 the mid-Sussex express services were routed via Gatwick Airport and the off-peak service to Dorking was reduced to two semi-fast services from Victoria per hour, with services to Horsham running every two hours. Now the average journey time to London termini takes a passenger 55 minutes.
The service to Horsham was neglected for some years during the 1980s with a shuttle service between Dorking and Horsham operating every two hours at off peak times. The service now provided is one train an hour through from London to Horsham, (headcode 84). The off peak service of two trains from London Bridge to Horsham via Sutton and Dorking ran for a number of years from about 1985 but had ceased by 2000. The former Horsham to Waterloo via Dorking North trains (headcode 15) ceased as early as 1980.

The resignalling scheme of 1938 introduced three aspect colour signals to replace the original semaphore signals. A new signal box was constructed and opened on 15 May 1938. It is one of many built in the Odeon style by the Southern Railway during the 1930s. The original frame was an A2 type Westinghouse with 44 levers. The box controls the line from Box Hill & Westhumble to Warnham.

Dorking Deepdene railway station is in Dorking, Surrey, England.
The station and all trains serving it are operated by First Great Western. It is on the North Downs Line. It is one of three stations in Dorking. The other two are Dorking and Dorking West. The station is within walking distance of Dorking station and interchange on a through ticket is permitted.
There is no ticket office and the station is unstaffed. Tickets can be bought on trains or from the automatic ticket machine at the foot of the westbound platform stairs. The ticket office at Dorking station is open seven days a week and sells tickets for all National Rail services. The station is accessed by steps only and as such there is no disabled access to either platform.

The Reading, Guildford and Reigate Railway (RG&RR) was authorised in 1846 and opened in stages. One of the first parts to open was between Redhill and Dorking, on 4 July 1849; the terminus was the present Dorking West station.

Redhill - Reading train in 1964
A second station in Dorking was opened on 1 February 1851 on the same route, and was originally named "Box Hill and Leatherhead Road"; this was shortened to "Box Hill" in March the same year. The RG&RR was soon absorbed by the South Eastern Railway (SER).
The station at Box Hill was temporarily closed from 1 January 1917, and reopened on 1 January 1919.[2] In the 1923 grouping the SER became part of the new Southern Railway, which on 9 June of that year renamed the station "Deepdene" to avoid confusion with Box Hill & Westhumble station.
On 11 May 1987 British Railways renamed the station "Dorking (Deepdene)".

The typical off-peak service is two trains per hour to Reading, and two to Redhill, of which one continues to Gatwick Airport.
Posted by Steve Sainsbury at 11:53