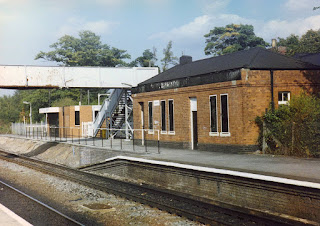 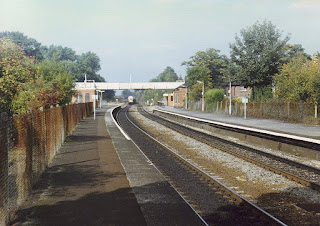 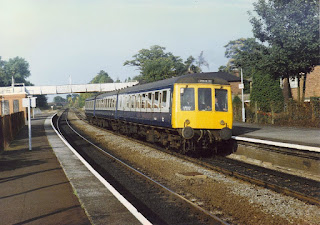 Three shots of Lapworth taken in October 1986. Classic DMU in blue and grey.


Lapworth railway station serves the village of Kingswood, Warwickshire, 1.5 miles (2.4 km) from the village of Lapworth from which it takes its name. It has two platforms connected by a footbridge. Most trains are those provided by Chiltern on its London Marylebone/Leamington Spa/Birmingham Snow Hill/Kidderminster route, but these are augmented by a few London Midland services.
The station was opened by the Great Western Railway in 1854. It was known as Kingswood until 1 May 1902 when the name was changed to Lapworth[2] to avoid confusion with the station of the same name in Surrey. From 1894, Lapworth was the starting point of a short lived branch line toHenley-in-Arden. The branch was closed as an economy measure during the First World War in 1915.[3]
A footbridge spans the remaining two tracks, and continues to the west of the northbound platform spanning where quadruple tracks once existed. For a brief period prior to the lifting of the quadruple tracks there was a DMU service along what had been the GWR's Paddington - Birkenhead main line. It plied between Wellington (Shropshire) and Lapworth stopping at all the intermediate stations and linking them with Wolverhampton Low Level and Birmingham Snow Hill.
The station is unstaffed; ticketing is restricted to a 'Permit-to-Travel' machine located at the main entrance to the station (off Station Lane) at the north end of the London-bound (southbound) platform. The station can also be accessed via a footpath from Mill Lane.

The station has a basic two-hourly service in each direction in the current timetable, provided by the Chiltern Railways Leamington Spa to Birmingham Moor Street service. In peak hours this is augmented by some additional London Midland services to/from Leamington, giving through links to Stourbridge Junction and Kidderminster. On Sundays a two-hourly service operates, but with through services to and from London Marylebone.

Posted by Steve Sainsbury at 08:40