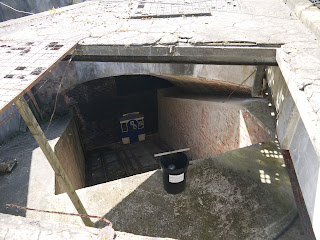 The booking area from above with mock up of car front on tracks. 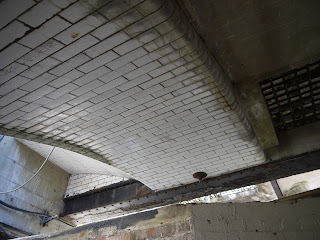 Some of the brickwork in the booking area. 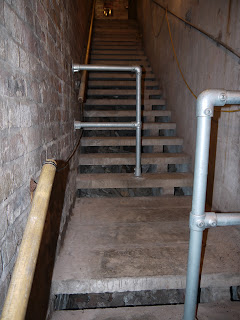 The stairs which run both sides of the whole tunnel - one of the rails is still in situ underneath. 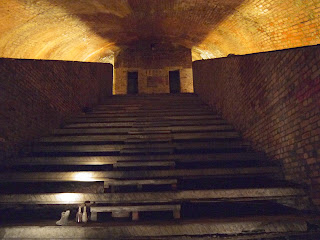 One of the chambers with seating where people stayed overnight during bombing raids.

A Bristol secret is the Clifton Rocks Railway which was a very unusual quadruple track funicular which linked Clifton to Hotwells. It closed in the 1930s. Occasionally it has an open day where visitors can wander around the booking area, and even more rarely has guided visits to the while line.

We joined one of these back on 9 April 2011. Debs hated it! The line is still in situ throughout and there is an active group preserving and promoting it. At the top the booking area has been restored
and a mock-up of one of the cars sits on the tracks.
A guided tour involves descending and ascending the flights of stairs that are on either side of the route, covering one of the rails throughout. The tunnel was used as an air raid shelter in World War Two and also had a radio station at the bottom. Lots of physical artefacts remain, both in place and in the museum area at the top station.
The group's website is here.
Posted by Steve Sainsbury at 17:14