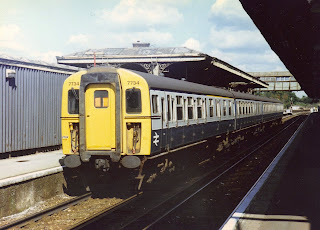 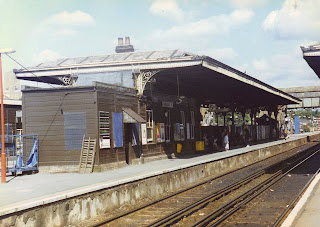 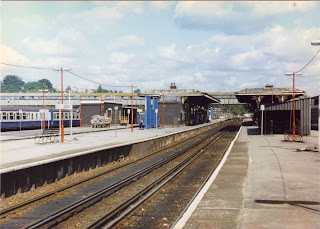 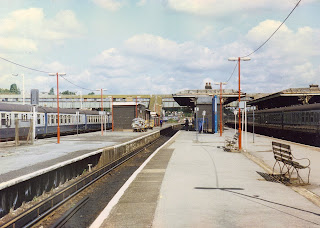 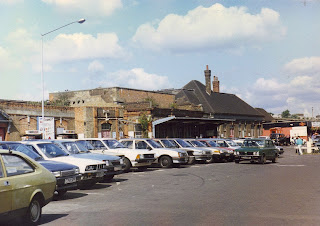 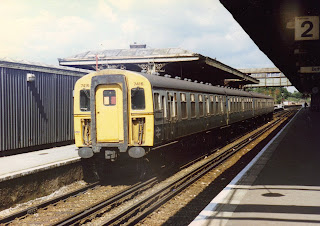 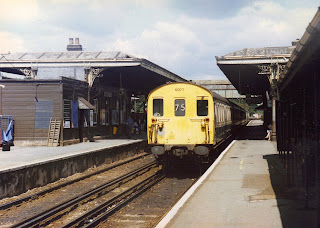 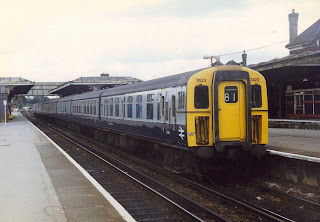 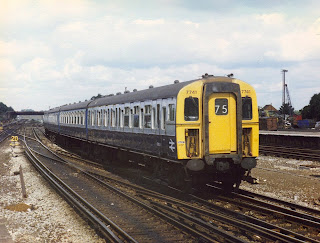 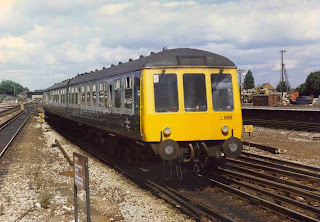 Western DMUs were working the Reading-Tonbridge line in 1986. 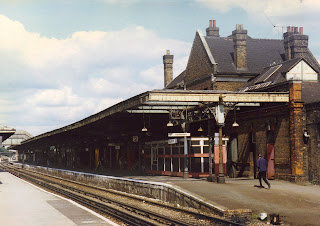 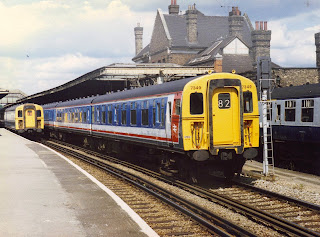 I think this was the first ever train I saw in Network South East colours.

Guildford was an interesting station back in 1986 with a good variety of trains, mainly electric but also diesels on the Tonbridge-Reading line. Sadly the valuable line to Cranleigh and Horsham is currently closed but otherwise Guildford escaped the stupid Beeching closures.


Guildford railway station is at one of three main railway junctions on the Portsmouth Direct Line and serves the town of Guildford in Surrey, England. It is 30.3 miles (48 km) from London Waterloo.
It provides an interchange station for three other railway lines: the North Downs Line northwards towards Reading, and with connection to Aldershot; the same line eastwards to Redhill; the New Guildford Line, the alternative route to Waterloo, via Cobham or Epsom.
Guildford station is larger, more frequently and more diversely served of the two stations in Guildford town centre, the other being London Road (Guildford), on the New Guildford Line however its London services operator is the same. 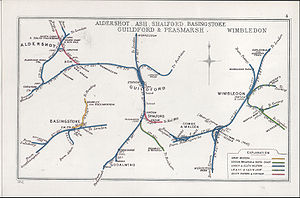 The Reading, Guildford and Reigate Railway opened its services on 4 July 1849, and was operated by the South Eastern Railway. LSWR services to Farnham via Tongham began on 8 October 1849 and the New Guildford Line to Leatherhead and Epsom Downs on 2 February 1885. On the latter line is the other Guildford station: London Road: the line to it describes a curve around the town on an embankment, crossing the River Wey by a high bridge.The station was opened by the London and South Western Railway (LSWR) on 5 May 1845, but was substantially enlarged and rebuilt in 1880.
Guildford station was also the northern terminus of the (currently closed) Cranleigh Line of the London Brighton and South Coast Railway, which opened 2 October 1865 and closed almost one hundred years later on 12 June 1965. This line ran to Horsham by way of Cranleigh, Rudgwick and Christ's Hospital.

Looking towards the west from platform 2.

An ex-Southern Region EMU operated by South West Trains at Guilford station in 2000.
The main station buildings are on the Down side. At the end of the Down side platform is a bay for the New Guildford Line. There are now three islands with seven platform faces plus the bay linked by both a long footbridge and a subway. Platforms 6 and 7 are opposite sides of the same line: these were used for unloading mail and parcels until the mid-1990s. The station was completely rebuilt (except for the platforms) by British Rail in the late 1980s.
Platforms 6 and 7 are on opposite sides of the same single line. Automatic train doors only open on the platform 6 side. Today doors are not opened on platform 7 due to the live rail being on that side, hence rendering that platform disused. Platform 6 is signalled for bi-directional working – trains may approach from either direction.

Guildford station was the site of an important motive power depot opened by the LSWR in 1845. The original building was demolished in 1887 to make room for the enlargement of the station, and was replaced by a semi-roundhouse which was substantially enlarged in 1897. This was closed and demolished in 1967. Farnham Road multi-storey car park was built on the site in the 1990s.

Guildford station was to have been the southern terminus for the proposed Heathrow Airtrack rail service. The project, promoted by BAA, envisaged the construction of a spur from the Waterloo to Reading Line to Heathrow Airport, creating direct rail links from the airport to Guildford, Waterloo, Woking and Reading. Airtrack was planned to open in 2015, subject to government approval. In April 2011, BAA announced that it was abandoning the project, citing the unavailability of government subsidy and other priorities for Heathrow, such as linking to Crossrail and HS2. 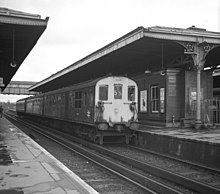 Class 206 3R unit, on a North Downs Line service, showing the pre-rebuild station. (June 1979)
The station is served by services operated by Great Western Railway from Reading to Gatwick Airport and South West Trains from London Waterloo to Portsmouth Harbour, Waterloo to Guildford via Cobham or Epsom and Ascot to Guildford via Aldershot. Occasional CrossCountry trains to Newcastle and Southernservices on the Sutton and Mole Valley route towards West Croydon & London Bridge also calls.

Southern Region steam in 1965 in Guildford.

Posted by Steve Sainsbury at 12:43