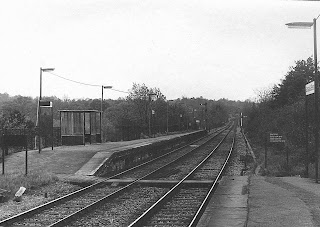 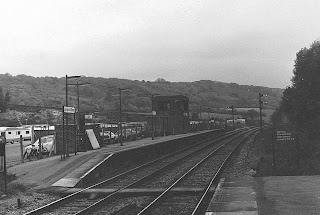 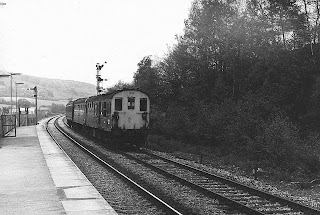 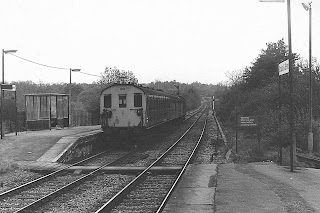 Gomshall and Shere is a small station on the cross country Reading to Tonbridge route. Back in 1977 it was served by the odd 'Tadpole' diesel multiple units. They were called Tadpoles because the front coach was a standard width vehicle whereas the trailing coaches were the slimmer ones used on the width-restricted Tonbridge-Hastings line.

In 1977 this was an intriguing diesel line running through areas where most lines were electrified. It had even been under threat of closure at one time, but nowadays is busier than ever providing a useful link to the Channel Tunnel from Reading, Guildford etc

Gomshall and Shere (now Gomshall) station was opened on 20 August 1849 by the Reading, Guildford and Reigate Railway Company.

It serves the villages of Gomshall and Shere in Surrey with services currently (2016) being provided by Great Western Railway. It is on the North Downs Line, which runs from Reading to Guildford.
The station has been unmanned since 1967, when this line was being run down for possible closure, being a non-electrified route running across the grain of the commuter lines it linked to.

It is still served by a rather sparse two-hourly service and sees around 50,000 passengers a year. The station has two platforms, each of which can accomodate a three coach train.