Shillingstone - a glimpse into the past ... and future. 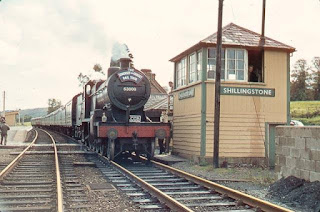 This is what thousands of us alongside the S&D and further afield are working towards! Although this pic dates back to an LCGB tour of the line in 1962, it also shows what we will see again all along the S&D when the line is restored! As well as the normal passenger and freight trains that will run on the new line it has always been intended that the line will feature classic infrastructure and will encourage the operation of specials over the line - particularly steam hauled specials! If you want to help make this happen lease join one, sone or all of the various S&D groups that are doing the work on the ground!

This part of the S&D has been transformed over the last ten years or so, with the station site at Shillingstone being fully restored and a new signalbox built from scratch. This is just a small example of the incredible activity along the line in recent years. Hard to believe that the S&D was once a dead railway!

Posted by Steve Sainsbury at 03:10