Back to the island. 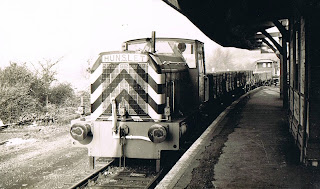 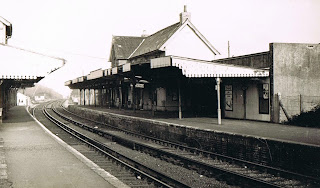 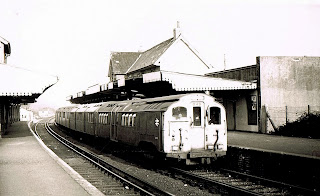 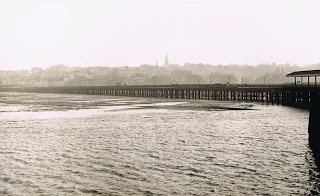 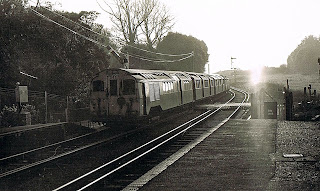 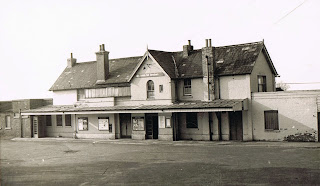 9th February 1975 found me back on the Isle of Wight, probably on another SR Rover ticket, and this time I went through Brading and on down to Sandown.

A bit of luck was finding the island's diesel locomotive - 05 001 - in the old Newport bay at Sandown station, with an engineering train. The branch up to Newport closed in 1956 but the platform was still signed as platform 3 back in 1975.

The station looked rather run down with the canopy in particular being defiantly shabby! The exterior looked abandoned almost, enhanced by the lack of cars and people. But the Island Line always was rather a seasonal affair and February 9th is traditionally the coldest day of winter!

It's great that the line is still there but the island needs its other lines back ASAP. The obvious first step is to get the Ventnor line open, it was always an insane closure and was done out of spite because the government would not allow the whole line to close. Newport and Cowes are also criminally devoid of modern transport and really the line across to at the very least Yarmouth needs to be rebuilt, connecting with the Lymington ferries.

Sandown station is a double platform-faced through station. However, from the mid 19th until the mid 20th century it was a junction station, also served by trains to and from Horringford, Merstone, Newport and Cowes. These lines used to be run by separate companies, the Isle of Wight Railway (Ryde-Ventnor) and the Isle of Wight Central Railway (Newport-Sandown).
The adjacent land, which used to be occupied by coal-yards, is now a housing estate and the former Terminus Hotel pub opposite has long been a private house. The line from Ryde to Shanklin was constructed between 1862 and 1864, and opened to passenger traffic on 23 August 1864. The original station building was extended between 1870 and 1871 through the addition of a two-storey extension to act as station offices.
In 1923, with the Grouping, came the formation of the Southern Railway. This brought all the railway services on the island under one management, and considerable modernisation. At first, it did not affect the services offered, but eventually the line from Ryde gained a more frequent service whilst the Merstone line declined. One particular feature of the Merstone line was the School Train, which was subsidised by the local authority, and for a significant time meant that the line remained viable. When the line was closed, children from outlying villages going to the Sandown Schools were then transported by bus, the current situation.

The present level of service is normally two trains per hour (tph) each way, which must pass at Sandown. However, due to the reduced trackwork at Brading, the frequency does not produce a predictable 30-minute service. Instead, in common with the rest of Island Line, trains run separated by a 20 or 40 minute gap.
This generally means that every hour, trains will pass at Sandown once. A journey from Sandown to Shanklin generally takes 6 minutes (although the published timetable allows 7), with a bus connection to Ventnor adding another 20 minutes. Trains to Ryde take about 10 minutes (to St. John's Road) or just under 20 minutes (to Ryde Pier Head).

Posted by Steve Sainsbury at 09:14