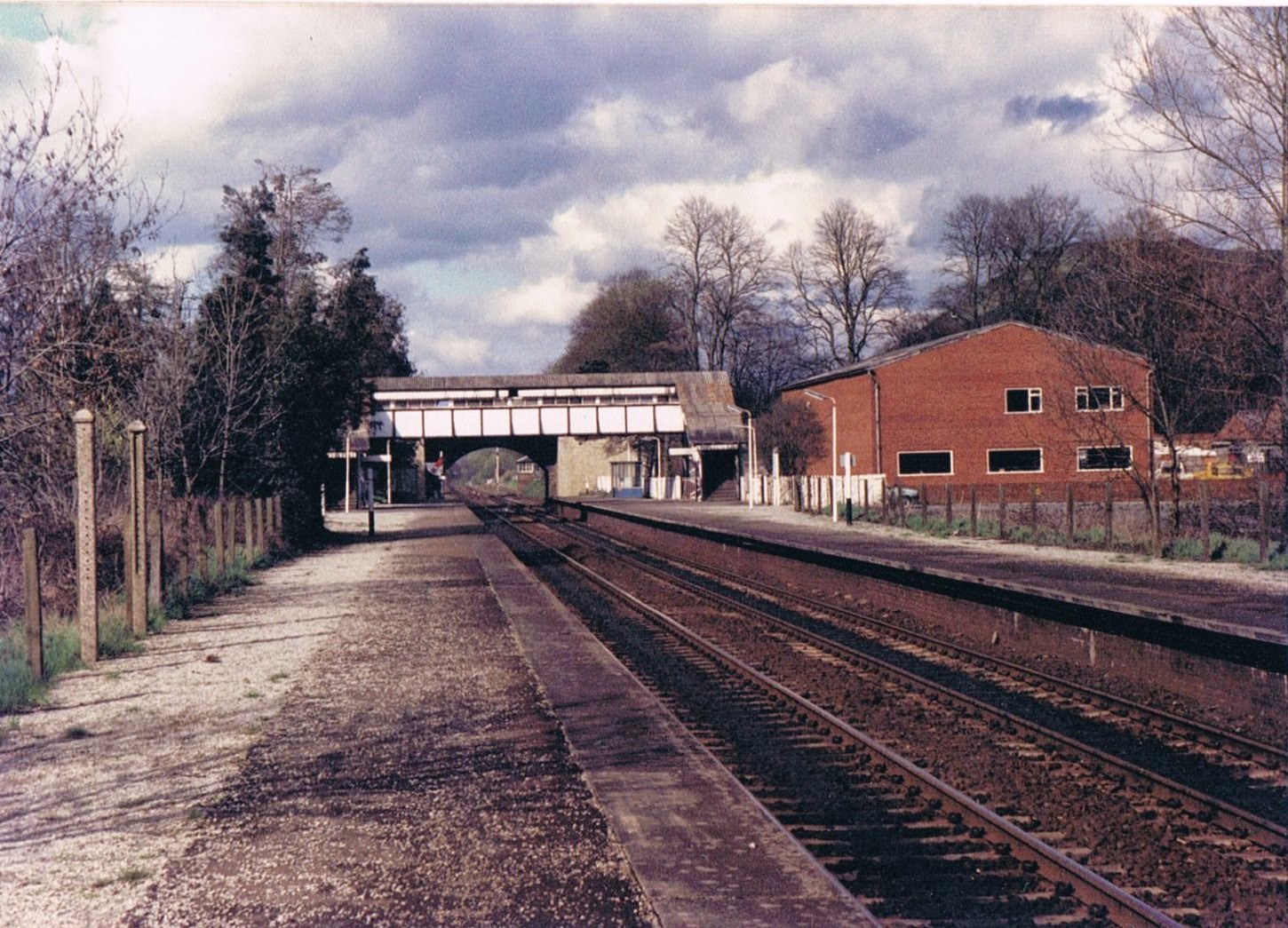 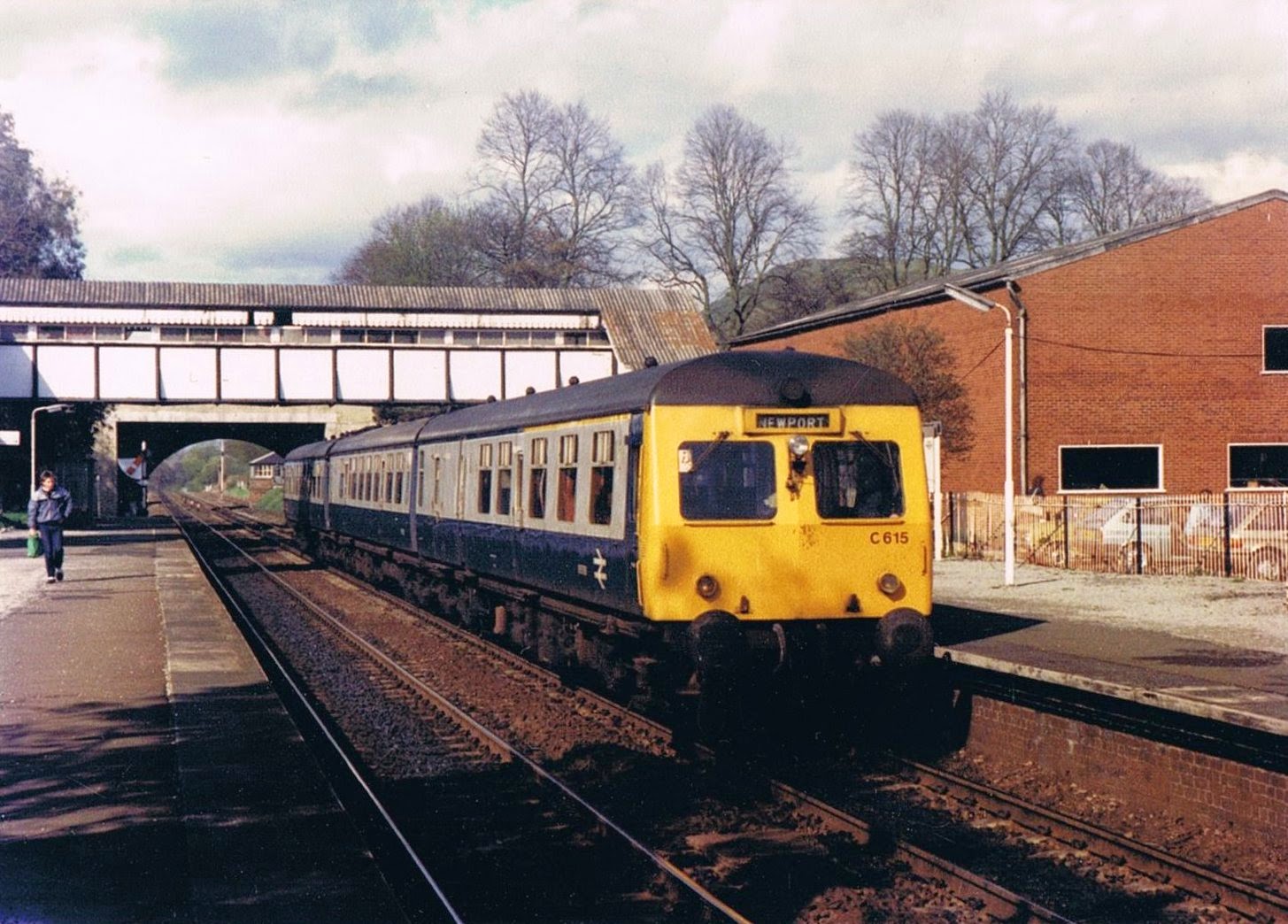 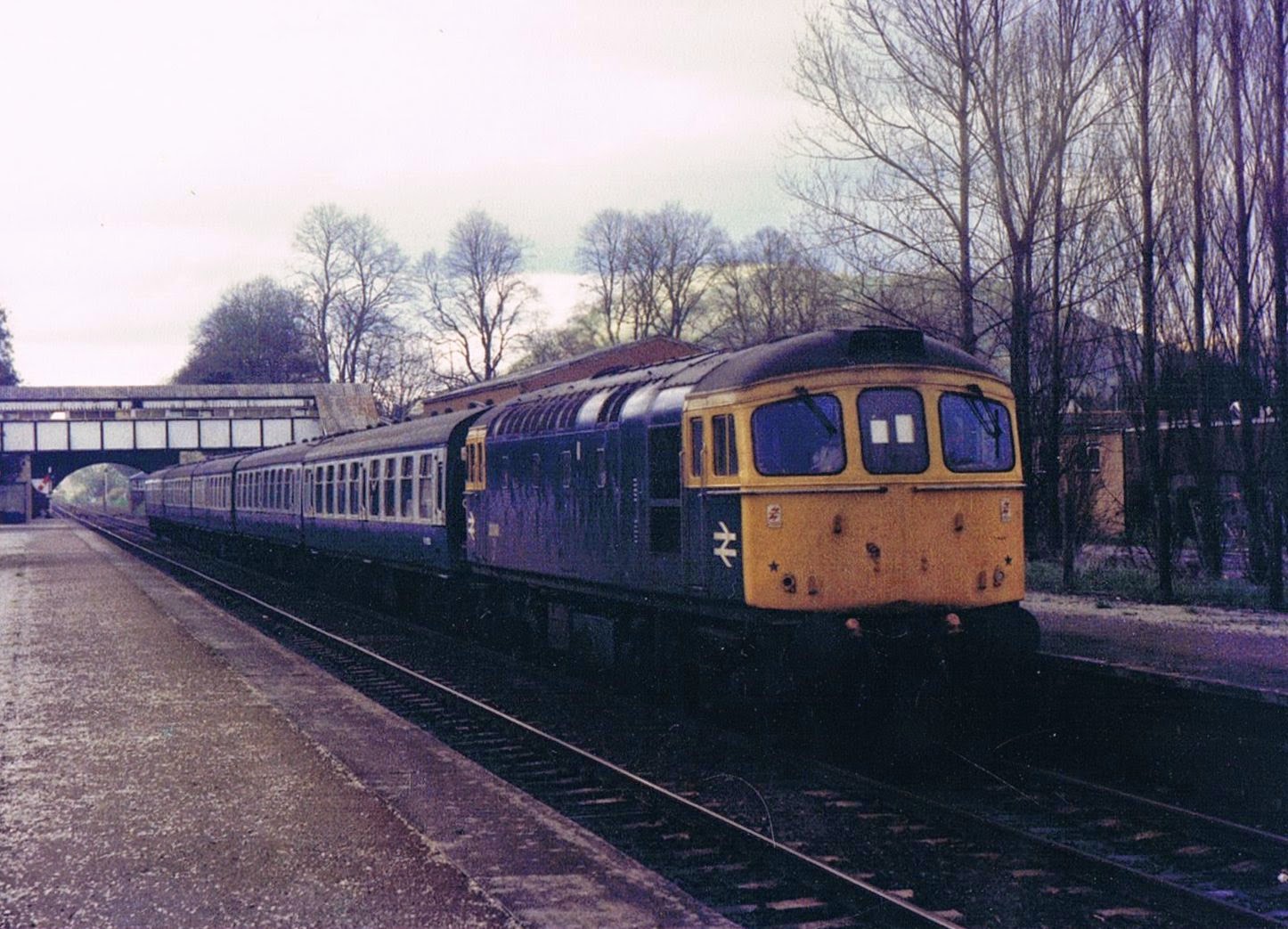 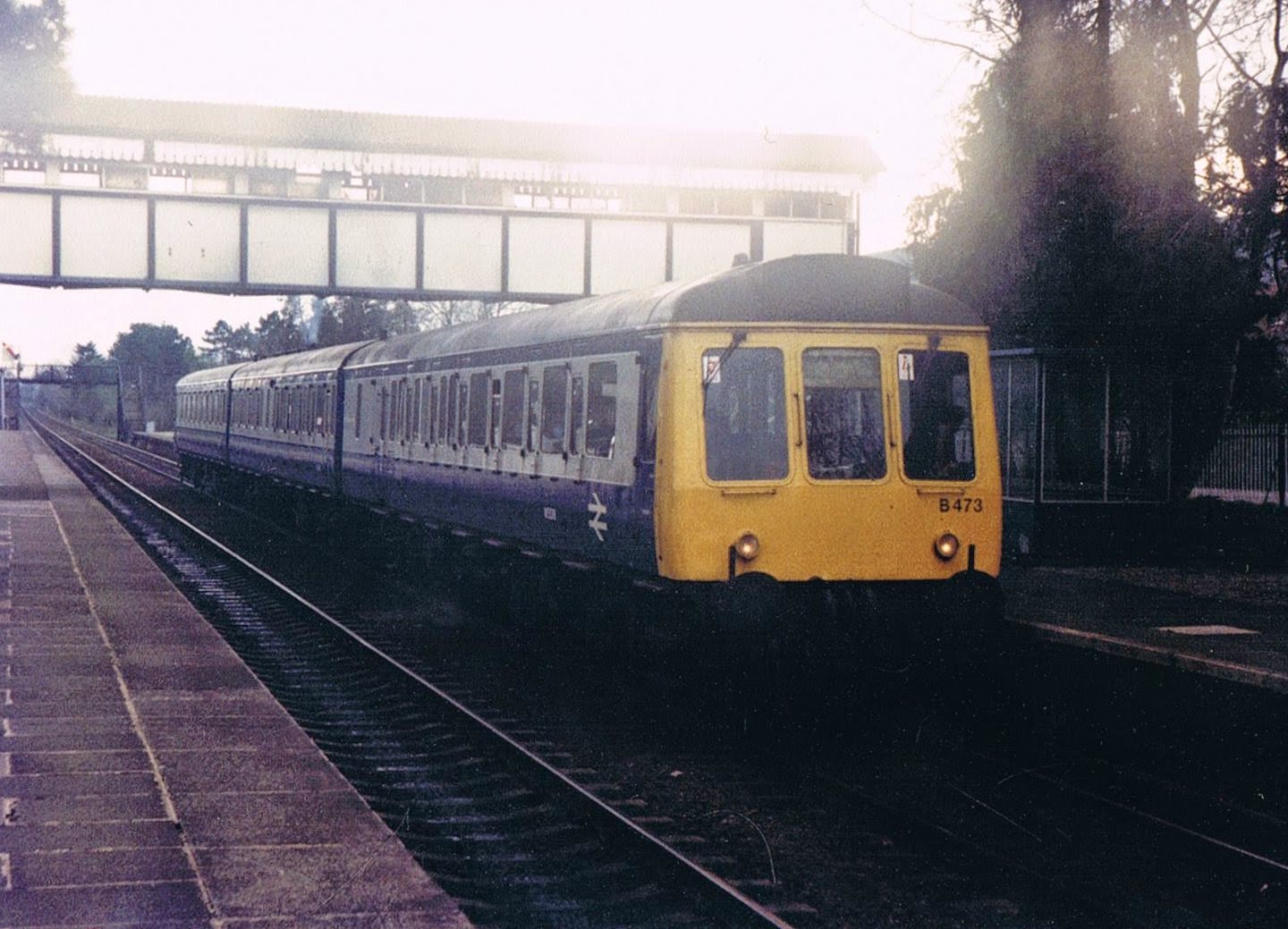 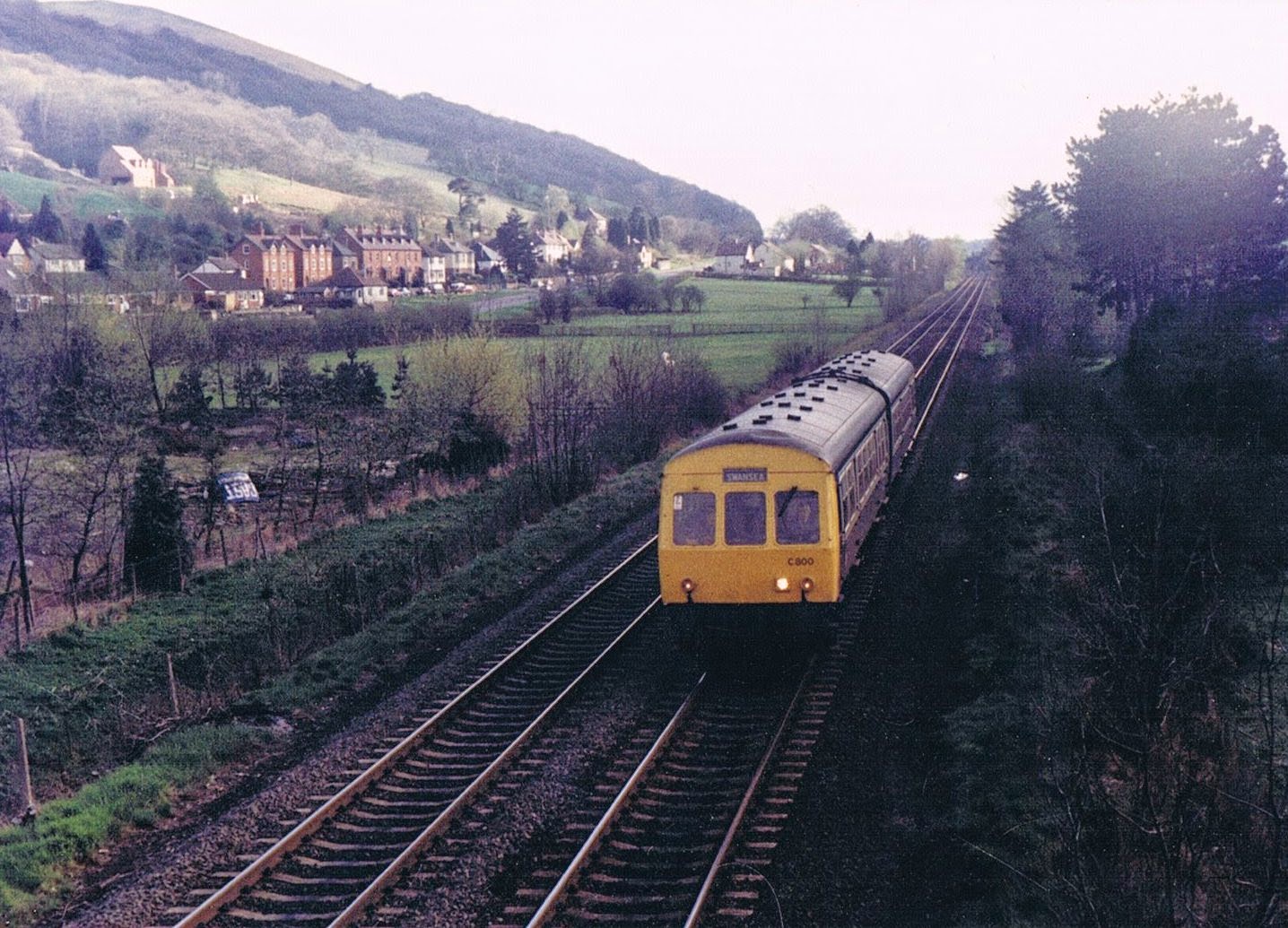 My only visit to Church Stretton was on 8 May 1986. It was a surprisingly busy station on this scenic line with a fair amount of variety including a class 33 on a passenger working. This line is even busier today of course. The station is also carefully maintained by volunteers and is a real asset to the town.

Church Stretton railway station serves the town of Church Stretton in Shropshire, England. The station is situated on the Welsh Marches Line, 12 3⁄4 miles (20.5 km) south of Shrewsbury railway station, while trains on the Heart of Wales Line also serve the station. All trains serving the station are operated by Arriva Trains Wales, who also manage the station.
The station lies on the highest point of the line between Shrewsbury and Craven Arms, and is the highest station in Shropshire. There is on the northbound platform a small plinth noting the station's altitude: 613 ft (187 m) above sea level.

The site of the original (1852) station, north of Sandford Avenue

The station opened on 20 April 1852 as part of the newly created Shrewsbury and Hereford Railway along with the rest of the line and stations. It was originally situated to the north of (what is now known as) Sandford Avenue and the old station building still remains, but is no longer in railway use. Sandford Avenue had been for centuries called Lake Lane and became Station Road with the arrival of the railway in the town, before becoming Sandford Avenue in 1884. The original station building was designed by Thomas Mainwaring Penson.

In 1914 the station was relocated just to the south of the Sandford Avenue road bridge, where it continues to the present day. New station buildings were erected, but these were demolished in 1970, the station having become unstaffed in 1967. Today the only station structures in use are two passenger shelters on the platforms and a footbridge. The southbound passenger shelter on platform 2 (since replaced)

The station has two platforms, one for northbound services (platform 1) and the other for southbound services (platform 2), with a footbridge crossing the line connecting the two platforms. The platform shelters were replaced and electronic information displays were installed in the spring of 2011. CCTV was also installed at the time and together with the new shelters has resulted in anti-social behaviour becoming almost non-existent at the station. In 2013 a ticket machine was installed at the station, on platform 1.

There are two small areas for car parking/dropping off, on either side of the line – one can be accessed from Sandford Avenue (the B4371), the other from Crossways (which comes off the A49).

The plinth on platform 1

The station has been "adopted" by local volunteers and is regularly kept tidy by them, including the garden areas behind both platforms. In 2008 a group of volunteers undertook to transform the unattended station gardens and two years later were awarded the Station Gardens of the Year competition. In 2011 a tree sculpture depicting two owls was carved by David Bytheway. There is also the Church Stretton Rail Users' Association.

For a town of its size, Church Stretton is comparatively well served by trains, although services are less frequent on Sundays. A number of passenger services operating on the Welsh Marches Line do not stop at Church Stretton, particularly on weekdays (Monday to Friday).

On weekdays, northbound trains run to Shrewsbury, and most continue to ultimate destinations such as Manchester Piccadilly, Holyhead etc. Southbound trains mostly run to Cardiff Central or beyond via the Welsh Marches Line, but four run to Swansea via the Heart of Wales Line.

The station has a large number of passengers using it considering the town has a population of just 3000; it is the 7th most-used station in Shropshire (the fifth for the Shropshire Council area). The high usage can be explained by two reasons: the town is a popular tourist destination and many of its inhabitants travel to Shrewsbury and Ludlow for employment, education and shopping. Looking south, showing the now removed signal box, signal and crossover, as well as the three (extant) bridges crossing the railway in the town.

The track through the station is prone to flooding when heavy rain occurs as, although at the apex of the line, it is at the bottom of the valley which Church Stretton is found in. (Church Stretton effectively lies at a saddle point.) At one stage during the infamously wet autumn of 2000, the space between the two platforms resembled a canal and train services had to be cancelled along the line.

Following the serious flooding of the railway line in 2000, the signal box at Church Stretton (which was situated to the north of the Sandford Avenue bridge) was "switched out". The signal box at Church Stretton closed entirely in 2004 and the set of points at the station lay defunct for a number of years and were removed in 2009, together with the box (built 1872) and all signals. The control of the line here has been transferred to Marsh Brook signal box, which is to the south.
Posted by Steve Sainsbury at 05:45