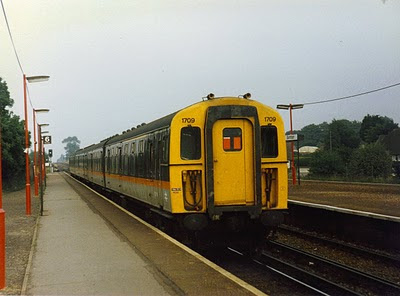 In the mid eighties the first moves towards privatizing the network began to be made with regions being allowed to drift away from the corporate blue and grey. For a brief few months Network South East experimented with the classy 'Jaffa Cake' livery, which sadly soon gave way to the garish red, white and blue. The old slam door stock, which had been exclusively either rail blue or blue and grey for the best part of twenty years, could for a year or so could be seen in a variety of colours. This was by far the best!

Posted by Steve Sainsbury at 10:25