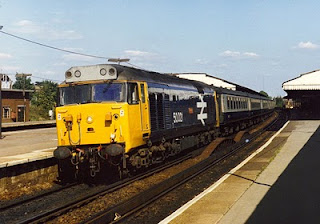 One for Paul Beard!

The Salisbury-Exeter route was much neglected in the 60s and 70s - incredibly closure was ever considered at one time. It was run down, singled over most of its length and often employed underpowered locos. The 50s however were good for this route, and could be said to be part of the line's revival which since the 80s has seen stations reopened (Feniton and Templecombe) and the line partly redoubled. The next few decades should see the line electrified throughout, nore stations reopened and hopefully some of the branches rebuilt (Sidmouth, Lyme Regis etc). With the New S&D reopening Templecombe should become an interchange station once more, and even the Seaton Tramway should be re-extended to Seaton Junction allowing exchange traffic.

Posted by Steve Sainsbury at 03:24