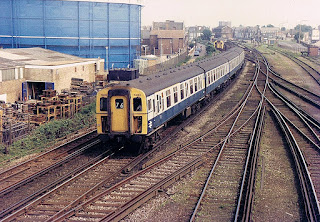 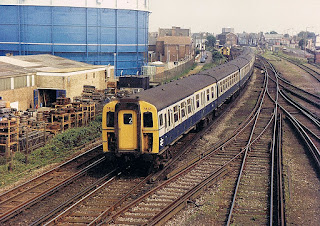 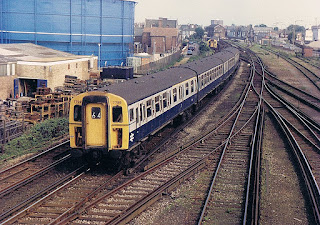 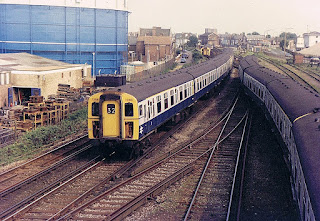 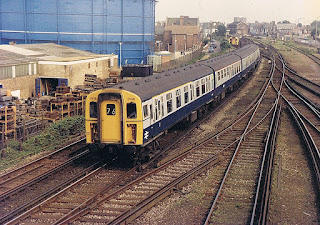 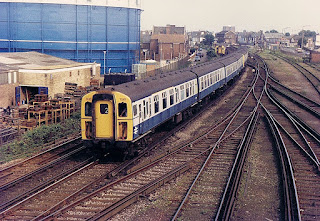 A succession of pictures taken on 21 June 1986 from the former footbridge at Littlehampton station. This was just before the NSE colours started appearing on trains, and this was just an everyday scene (repeated six times!) Much has now changed, 30 years on. The slam door trains of course have gone, the track layout has been changed and the footbridge has been removed, replaced by a far less photographer friendly one closer to the station.

These days I try to get a lot of atmosphere shots, in an attempt to set the trains within the context of the wider social scene. But I still take plenty of record shots as well. I find the more everyday and mundane the scene the more interesting they become as years pass. Far too many railway photographers take the same shots of steam specials, of the glamorous but slightly fake stuff. Or they pop along to a heritage line and take lots of 3/4 front view shots concentrating on the engine. All the time there are fantastic shots that never get taken!

I also hear a lot of complaints about 'railways not being as interesting as they used to be'. This has always been said, and probably always will be. It's true to an extent of course, but we are all affected by this feeling that we've just missed out. I did just miss out on everyday steam, at least for photos, but I did at least see real steam on action on the network - at Ryde, at Lyminster, at Waterloo. But I got to photograph the class 33s and 50s on passenger duties, the WR diesel-hydraulics on the sea wall at Dawlish, the Bridport branch, Swanage, Okehampton, Kemp Town and a good few other lines that have closed or become heritage lines.

Just get out there and snap and don't complain! Future generations will be grateful that you did, and envy what YOU saw ...

Posted by Steve Sainsbury at 12:24