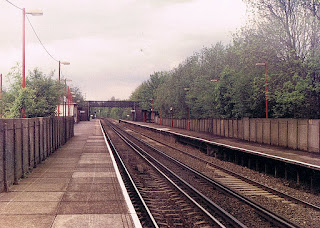 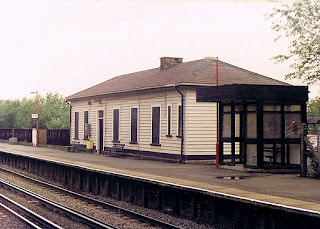 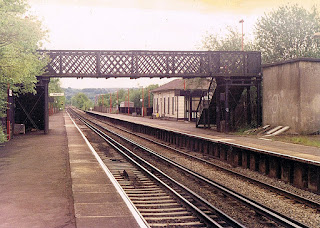 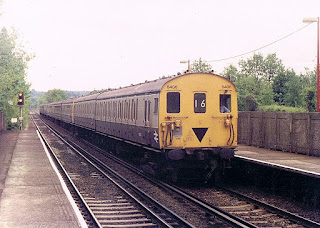 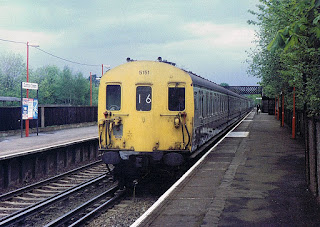 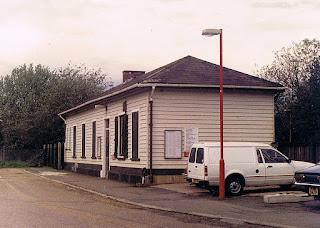 On 28 May 1986 I visited Dunton Green in Kent for an hour or two. This was a nice wayside station with plenty of trains. Until 1961 it was also the junction for the superb Westerham branch, which almost became a majopr tourist attraction after closure. What an asset it would be now, offering both tourist trips through excellent scenery and, more importantly, allowing Westerham and Brasted to continue as flourishing commuter areas into the future.

Even without the attraction of a community line connecting with London trains the station was a fascinating spot, with a good variety of trains (which will appear in the next part of this article!)

Dunton Green railway station serves the village of Dunton Green, on the outskirts of Sevenoaks in Kent. Train services are provided by Southeastern.
There is no ticket office or ticket machine. There is a Permit to Travel machine. The ticket office, in an 'up side' building, manned only during part of the day, became unstaffed during the early 1990s after which time there was a substantial increase in vandalism here; a PERTIS 'permit to travel' machine is located at the entrance to the 'up' platform. There is an electronic display of departures but no audio messaging.
There is a small car park (access via Station Road) which holds c. 20 cars. As of November 2008 the car park is no longer free, tickets must be purchased from the ticket machine in the car park.
Until 1961 this station served as the junction for the Westerham Valley Branch Line to Brasted and Westerham. When this line was constructed, a subway was built which passed under the branch platform and allowed access from the main station forecourt to a footpath leading west to Dunton Green. This subway remains in place today.

The typical off-peak service from the station is two trains per hour southbound to Sevenoaks and two trains per hour northbound to London Charing Cross, calling at all stations to Hither Green and then running fast to London Bridge.
The typical peak service from the station is one train per twenty minutes southbound to Sevenoaks also some services go through to Hastings (viaTunbridge Wells) and one train per twenty minutes northbound to London Cannon Street, calling at all stations to Grove Park and then running fast toLondon Bridge.
During the morning peak there is a connecting fast services at Chelsfield for Dunton Green passengers travelling to London Bridge, Waterloo East and Charing Cross. There are similar services in the evening peak going towards Tunbridge Wells. Passengers can alight from this service at Chelsfield and catch a connecting service to Dunton Green.

Posted by Steve Sainsbury at 10:29