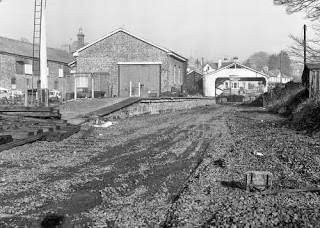 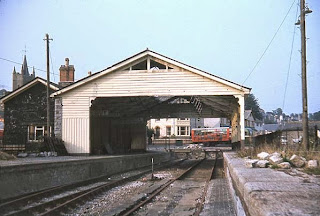 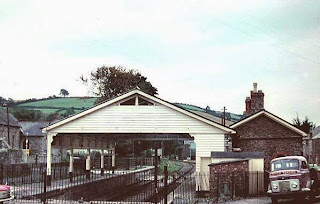 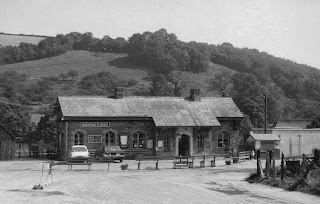 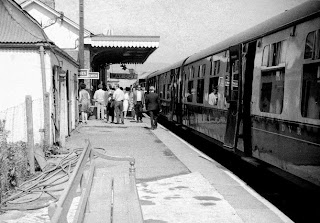 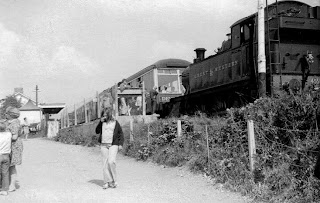 My first ever visit to a steam line was to what was then called the Dart Valley Railway, from Totnes to Buckfastleigh. This was 42 years ago - and I was lucky enough to take a few photos.

The line wasn't technically a heritage line but a business, reopened to make money from tourists. Back then you took a round trip from Buckfastleigh to just short of Totnes, where you couldn't alight. Since then trains have run into Totnes network station and later to a separate station at Totnes (Littlehempston), which is the current situation. This saves the line huge access charges with the downside of passengers having to take a short (but scenic) walk between the two Totnes stations. The lines are still physically connected.

The line is now a genuine heritage line, the business side of things now concentrated on the nearby Paignton-Kingswear line, which closed in 1972.

But there is an elephant in the room here, and it's the last two miles of the branch between Buckfastleigh and Ashburton, which are currently lifted. Amazingly the line was truncated in the early 70s because a ROAD took part of the trackbed. But forty years on the world has changed completely, and now it's roads on the back foot and in terminal decline, whilst railways are getting busier and busier.

It's time to look at Ashburton again. Buckfastleigh is a problem on several levels. It is rather overdeveloped (in the same manner as Norden on the Swanage line and Bishop's Lydeard on the West Somerset), an intermediate station masquerading as a terminus. The South Devon Railway, as it is now known, has invested a great deal into Buckfastleigh. A shop, restaurant, loco sheds, picnic area, miniature railway and a museum. All will lose out when Ashburton becomes the terminus again. To their credit the SDR are supporting a return to Ashburton. Perhaps they've grasped that they can have the best of both worlds. With facilities remaining at Buckfastleigh the new Ashburton terminus can retain its small branch terminus atmosphere. If the timetable allows the pattern of services could include long stops at Buckfastleigh in one direction, to allow people to continue to use the facilities.

As for Ashburton they are on the cusp of a HUGE increase in tourist visitors when the line is fully reopened. And also stand to eventually gain a REAL public transport service connecting with the South Devon main line at Totnes in due course. As our road network continues to decline Ashburton can look to a future - perhaps 10 to 20 years hence - where once again the locals can catch a train and with one change be in Plymouth, London or Bristol. Local businesses will also have a way of sending out their products and bringing in their raw materials.

But I've said enough, and what I've said is pretty familiar to most of you! I'll let the people who are actually working towards the reopening tell the rest!

Preserve the chance to have a railway back in Ashburton

I write supporting a growing number of the younger element of the South Devon Railway and its supporters who are heavily involved in railway operations not too far from Ashburton.

At the time the A38 was built the Dart Valley Railway put more effort into acquiring the Paignton-Kingswear line. There was less will to retain Ashburton Station and railway.

Now the two railway lines are entirely separate, the loss of the top end of the branch is still a sore point. Increasingly - all be it late in the day - there is a desire among principally some of the South Devon Railway's most devoted volunteers to prevent decisions being made now which deny the railway returning to the town.

As part of my background, I have been working for the SDR since 1994 (full time as a paid fitter/ steam driver for 12 years and still drive steam) I now run a digital piano shop in Bristol. I have never known in all this time as much interest in Ashburton station.

I also am more aware than most of the enormous task facing any fledgling organisation when trying to work with big business and other organisations intent on making money and property developers etc. We mostly thought even 15 years ago that there was no chance of any railway resurgence to Ashburton. Many of us have grouped together, there are Facebook pages now devoted to Friends of Ashburton Station, pictures and well wishes are uploaded daily. National heritage railway press have published articles on the history and intended fate of the site.

Clearly there has been a lot of work done so far on this process of consultation for the site and many of the railway supporters have not been involved with any degree of conviction early enough in the process. While the South Devon Railway is successfully operating the very large concern that it is - any resurgence of railway to Ashburton has not yet reached out into involvement.

I can say this though - it has long been known to us at the SDR as a general rule that losing the only surviving Brunel branch line terminus station and losing the chance to try and preserve the station site, track bed and railway buildings, all of which could be restored to original design would be wrong.

Perhaps you know a great deal about heritage railways and the costs involved, perhaps you also know that they are dear to the hearts of well-wishers the country over. Even in 2014 railway heritage preservation is as strong as it was when the Dart Valley Railway was formed- see how other locations are getting their railway back.

I have always realised that any railway activity in Ashburton would not be universally welcome. Never the less the benefits to business in the town would be good.

Initially our supporters wish to see the railway land left un-developed in its entirety. The station, goods and engine sheds and the track bed secured to pear tree. Momentum for our cause could then progress towards a national fund raising campaign to recreate a heritage site, complete with running line as far as pear tree. Done well visitor numbers would certainly increase.

Now I could ramble for hours trying to impress a point of view. I could come across as yet another railway fan. I could equally be trying to support an idea that may not be the majority view of the town. Ask yourself this though- which places along the valley most look like they are glad that a little railway came, and are still glad that people with passion made it possible that the railway stayed and became loved, visited, enjoyed by the people young and old that work on it.

In this day and age where projects in this country of ours are weighed down by quite large obstacles it would be easy for the population of Ashburton to have dismissed as impossible the chance of any railway return to the town. How would they respond if they thought it was a probability?

The degree to which railways built the towns they served is so important that even in 2014 people want them back, not just as transport links ( but increasingly so ) , not just as heritage sites, ( but the tourist interest is still very high ) , not just because a few nutters want to play trains ( but because men, and women, of all ages support, work on and get real enjoyment from spending time at the railway. )

While your deliberations on planning are progressing please be assured that a new organisation affiliated to the South Devon Railway with a growing number of supporters is fearing the permanent loss of the heritage of a part of the branch that was discarded wrongly in 1971.

New younger railway pioneers with the same spirit that saved countless miles of discarded railways from obliteration are rising up to be noticed in Ashburton. Among us are people with various skills not yet moulded into a coherent body skilled to engineer our aims- but we could be, with support, a more pleasing asset to Ashburton than more car parking , more supermarkets and other normal stuff more suited to towns that don't have a genuine branch line terminus largely intact.

Membership of the South Devon Railway will, I suspect, also be in favour of protecting the former railway land for a return to Ashburton. Studies have been carried out in years gone by as to the viability of re-instating the railway to the town. One thing though is very clear, when it's gone, it's gone. Once some flats or a supermarket or a car park are built there......

Of course- what's better for Ashburton, surely not a railway heritage visitor centre with a more long term aim of reconnecting to Buckfastleigh? Heritage bus links are the obvious interim measure allowing holiday makers visitations to the town.

I am of the age now where I see a clear reality to the task ahead of persuading any organisation as big as the national park and the whole of the town that the railway would be of benefit. Put simply, it would be of more benefit than car parking, supermarkets and housing- all of which can be built elsewhere and should never be built on former railway land.

If my email aims one thing it would be this:

Please note that railway supporters, given an indication that their views have been heard, could rally to produce an asset to Ashburton more pleasing and in keeping with the benefits that heritage steam railway already brings to the rest of the entire Dart Valley. This of course made possible by ordinary passionate people with a vision.

Collectively we suggest the town refrains from further developing the historical station site and expresses an interest in allowing further development of the fledgling group currently moving to retain and reinstate to railway use, for the much wider benefit than other lesser alternatives appear to offer.

A number of people interested are attending the meeting Thursday.

The group Friends of Ashburton Station exists on Facebook with a number of supportive photos and comments. You may like to see the heritage buses parked on the terminus forecourt!

Please be under no illusion- given the chance railways can return where they belong. There are many examples and all of them seemed unlikely when in their early stages. It would be a pity for the town to think that there was no will.

Having been involved with the SDR for over 25 years now I can say that never has the thought of the old station being lost for ever been so strong and never have such a band of younger supporters felt the need to stand up. If I have added any credence to the idea to assist in the aim then I'm glad.

This email can be used in support of the best option for the retention of railway land for the purpose of purchase and maybe one day the eventual reinstatement to our fabulous railway along the Dart. We know this is a late entry bid, we also know that once lost, there is no chance of extending the South Devon Railway if there is no aim to return right to the heart of the original terminus.

Hark at me..... Started his own business, suddenly things seem achievable after all.

Posted by Steve Sainsbury at 03:07