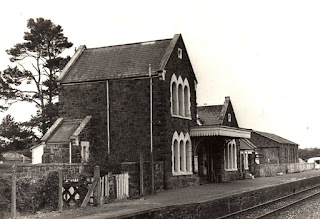 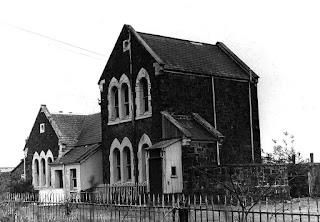 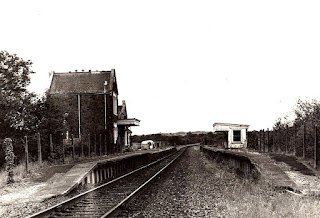 Five years after the Okehampton line closed to passengers I took these photos of Bow station.

I'd travelled on the route in the summer of 1972, just before closure to passengers. At that time the line was still double track and I'd managed to get the seat at the front of the DMU which gave me a view of the line ahead. It was impressively engineered and was clearly a former main line. The trains still stopped then at Bow, as well as the other intermediate stations at North Tawton and Sampford Courtenay. The whole trip up from Exeter had been steeped in Southern Railway heritage, despite the line being by then under the control of the Western Region. I was glad I got to travel on this lovely stretch of line as at the time it perhaps seemed that it was gone for good.

It isn't of course. Passenger trains run again - after a fashion - to Okehampton, at least in the summer. But the big development of course is the inevitability of the line's reopening through to Plymouth, inevitable because with sea level rise accelerating and storms getting worse the fantastic line through Dawlish is under a death sentence, although that may well be an extended one. The effect of storm damage to the coastal route is to effectively cut off much of Devon, including the resorts of Torquay and Paignton, together with Plymouth, plus the whole of Cornwall, from the rail network. This of course happened a couple of years ago, and the economic effects were dreadful. Each year the coastal route becomes more vulnerable and more expensive to keep open. A second route is absolutely essential and most of it of course is still there - the line to Meldon to the north of Dartmoor, and the line from Plymouth up to Bere Alston on the western flank, with reopening a further six miles to Tavistock in the pipeline. The stretch in between, only around 20 miles, is still there waiting for the tracks to be relaid.

Hopefully full use will be made of this asset in the future, with regular express and local services (plus freight of course) making full use of the brillinatly engineered ex-SR route between Plymouth and Exeter, feeding far more traffic on to the Exeter-Salisbury-Waterloo route. Capacity needs to be increased, but it's all possible with redoubling of the Exeter-Salisbury line now under way. And hopefully Bow station, and all the other intermediate stations along the route, also get their trains back. Let's do this properly!

Posted by Steve Sainsbury at 11:23