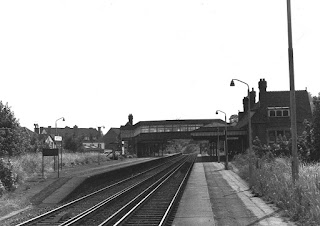 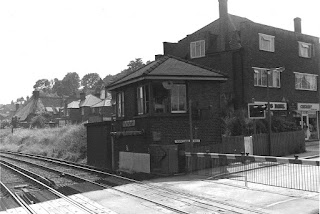 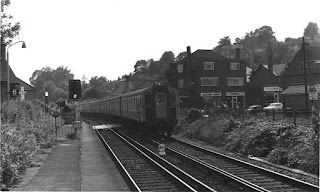 A station I've only visited once, on a line I've probably only travelled on a couple of times, in 1977 Farncombe was a surprisingly big station for a small place! I only spent a brief time there
and only one train passed through - 7406 on a Portsmouth to Waterloo train.

Farncombe railway station opened in 1897 as a minor stop on the Portsmouth Direct Line between Guildford and Godalming, England. It is said to have been built at the instigation of General Sir Frederick Marshall, a director of the London and South Western Railway Company, who lived nearby at Broadwater.
The station lies in the centre of Farncombe, a northern suburb of Godalming. Nowadays it is served by South West Trains on the mainline from Waterloo toPortsmouth Harbour. It would have been served by the old Southern Railway.
Despite being of little significance, Farncombe station is staffed most of the time, and has a café on platform 1 in peak periods. As well as the ticket office,Farncombe has two ticket machines, both of them on platform 1. There are two full barrier level crossings at Farncombe, one at each end of the station. The two platforms are connected by an old, metal, bridge. There is a large carpark located by the exit of platform 1, this is pay and display and is open all day, 7 days a week.

The classes of trains that use it are South West Trains class 444s and 450s with occasional freight workings. There are two stopping trains an hour and two fast trains (non-stop) an hour in each direction. These consist of:
2tph to London Waterloo via Woking
1tph to Portsmouth & Southsea (These services do not call at Milford and Witley)
1tph to Haslemere

Posted by Steve Sainsbury at 07:18