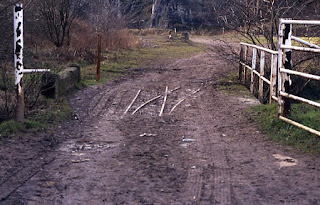 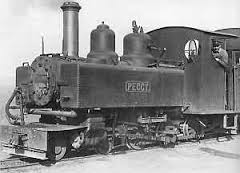 Peggy working on the ALR 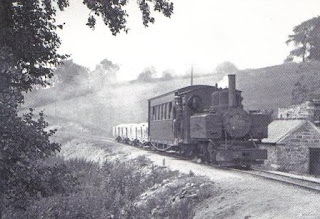 Mixed train on the line. (Source) 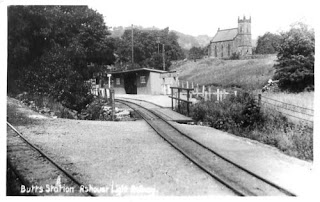 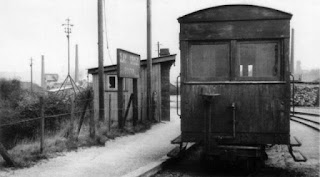 One little known narrow gauge line in England was the Ashover Light Railway which was opened as late as 1924 and closed - quite late for this sort of line - in 1950. It's a shame it didn't last a few more years as it could have become a candidate for early reopening as a preserved line.

One of the Baldwin engines at Ashover, ca. 1948

George Stephenson surveyed the route for the North Midland Railway between Derby and Leeds in the 1830s. The route passed close to Ashover where Stephenson saw the potential for the development of a colliery. He formed George Stephenson & Company in 1837 and built a colliery and coke ovens at Clay Cross which opened in 1840. The company passed to his son Robert Stephenson on George's death in 1848, and in 1852 he sold his shares, the business becoming the Clay Cross Company, which was at one time the largest independent employer in the UK.

The company continued to develop its mining interests and in 1918 it purchased the Overton Estate at Fallgate with the aim of extracting minerals. An order under the Light Railways Act was obtained in 1918 to build a standard gauge railway between the Midland Railway station at Stretton and Ashover, with a 2 ft (610 mm) gauge rope-worked mineral railway serving Alton colliery. This railway was not built because the cost estimates were too high. Instead in 1920 H. F. Stephens, the consulting engineer for the line, proposed building the entire railway to 2 ft (610 mm) gauge. This considerably reduced the costs of construction and the plan was approved.


Construction started in 1922 and the railway opened to goods traffic in 1924.[1] The formal opening to passenger traffic took place in March 1925. The line was built using surplus equipment from the War Department Light Railways. Although the line was built principally to carry mineral traffic, its passenger service proved successful during the mid-1920s, but competition from buses saw numbers decline and Winter services ceased in 1934. All passenger services were withdrawn in 1936.
The mineral traffic continued but the railway declined through the 1940s. In 1949 the railway's last remaining contract with Butts quarry was terminated and the quarry closed in 1950. The railway closed on 31 March 1950. Most of the rail remained in place through October of that year when a last inspection trip was made. After that the majority of the railway was lifted. However a short length was left in place around the Fallgate works. This remnant track continued to be used until 1968.

In 1996, the Ashover Light Railway Society was formed with the aim of saving the surviving features of the railway. They carried out a track-bed survey, and found that most of the track-bed between Ashover and Ogston Reservoir was largely intact. This changed the direction of the society from preserving the lines remaining artifacts, to reopening at least a short section of the line.


So far, the society has had much support from the local population and the council for the area. In 2007, they bought 'Where the Rainbow Ends' cafe, and have since dismantled it and put it into storage for future use.

The line started at Clay Cross Works, just above the northern portal of the Clay Cross Tunnel. From here, the line swung northwards out of the town, then curved westwards through 180 degree to avoid going through Clay Cross town centre. The problem with this route was the Chesterfield Road, now the A61, and crossing it required a steel girder bridge spanning 45 feet. The height had to be 16 feet above road level, which required a half-mile long approach embankment to be built. The bridge and embankment were the only major pieces of engineering on the entire route between Clay Cross and Ashover. The bridge support on the west side of the road can still be seen today. Shortly after the opening of the railway, the Pirelli Tyre Company at Burton-upon-Trent had a large advertisement painted on the bridge therefore it became known as ‘The Pirelli Bridge’. Several stations were provided along the line, with the main terminus and headquarters being Clay Cross & Egstow within the Clay Cross Works. Four further stations named Chesterfield Road, Holmgate, Springfield and Clay Lane were erected within the town boundaries of Clay Cross, with the next station being at Stretton. At this point the line was still continuing southwards, but soon swung westwards again to follow the picturesque course of the River Amber as far as Ashover. Stations along this section were Hurst Lane, Woolley, Dalebank, Milltown, Fallgate, Salter Lane (for Ashover), and Ashover Butts.
Posted by Steve Sainsbury at 06:41