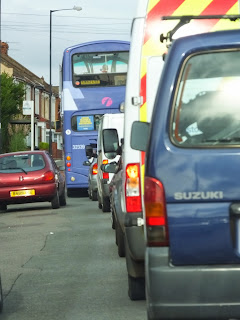 Imagine you were standing at Templecombe station in 1952, on a summer Saturday. If I'd told you then that the busy line to Bath and Bournemouth, on which at that time there was a constant stream of passenger and freight trains, would be closed within 14 years and that the very busy station you were standing on, served by both the Somerset and Dorset Railway and the main line from Waterloo to the west of England, would also close on the same day, you'd have probably dismissed me as a nutter! Yet all this came to pass.

Now think about today, think about our busy road network and what is your reaction if I was to say that within 20 years it would nearly all have gone? Pretty much the same I would think!

But think about this. Our rail network wasn't destroyed because the fuel to run it no longer existed. In fact there is still plenty of coal underground in the UK and, more importantly, plenty of commercial forests. But we saw fit to destroy our country's resilience so we could IMPORT oil to run our trains and, of course, our cars, lorries and buses. It was a short term political decision masquerading as an economic one. True, diesels were easier to run and much more comfortable for the people running them. And cars, lorries and buses gave us greater flexibility. Up to a point  ...

But take a look at the picture above. This was our trip into Bristol Friday morning. Two miles, it took about half an hour. Should we have taken the bus? Not really, because look what is a few vehicles ahead of us!

Think of all these stationary vehicles, burning precious oil. Think of it happening all over the world. Oil is a finite resource and most commentators now accept that we have already used more than is left in the ground. And at the same time we are burning more than ever before, not just in road vehicles, but in diesel locomotives, ships, aeroplanes, making plastics and growing food. Our whole economy is built on it, yet within twenty years almost all of it will be gone. Yet to look around you'd think there was an unlimited and renewable supply!

So what exactly do planners and politicians imagine we WILL be using in twenty years' time? They waffle on about exotic things like biofuels (hopeless as they depend on huge fossil fuel INPUTS to grow, and compete with food growing anyway), hydrogen (an energy sink as it is only an energy carrier, not a fuel, so the energy would still need to be generated), electric cars - really, with the power companies already warning us that we face electricity blackouts into the future? Imagine all those electric cars charging up as well! The fact is there isn't a serious contender, and when the oil runs out (or more precisely becomes too expensive for most of us to afford) road transport will come to a stop. There's nothing we can do about this, it's inevitable.

So if we want to keep things moving we need to switch to rail. Some will say 'but doesn't that need energy as well?' Of course it does, but the inherent energy efficiency superiority of rail means that we can move far more freight and people with the same amount of energy. This will become the ONLY factor considered in future transport planning. Rail also has a huge advantage in that the energy can be transmitted to the locomotive, through wires, conductor rails, stubs, conduits etc. This simply can not be done with road vehicles (with the exception of trolleybuses, but they may as well be trams anyway!) - it means both flexibility of delivery system and also (very important in an energy-poor world) the traction units don't need to carry on board fuel.

So the roads may seem busy today, and perhaps look like they will always be there, but return to Templecombe in 1952 and you'll see looks can be deceptive. The roads will begin to empty, less and less money will be available to maintain them (asphalt needs oil for example), people will start demanding an alternative way to get around and all of them will look to rail.

As for Templecombe itself? The station reopened in 1982, the line, which was savagely singled in the 60s, is gradually being returned to double track, soon trains will go beyond Exeter via Okehampton to Plymouth, and even the Somerset and Dorset is gradually being rebuilt. We are already seeing the switch from road to rail happening in this little corner of the world, soon it will be happening everywhere.