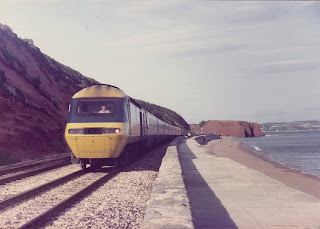 DAWLISH SEA WALL FACEBOOK GROUP
I'm off to Plymouth on Monday for a couple of days, going by train of course. Storms are forecast for Sunday and Monday, a bit too early in the autumn for my taste.
It brings the fragility of what is currently the ONLY rail link to southern Devon and Cornwall. Of course it wasn't always this way and up to 1968 you have the choice of travelling via Newton Abbot or Okehampton. Until 1967 there was a third (but very rural and slow) link via the North Cornwall line. Perhaps by the logic of the times the North Cornwall should have been closed (but obviously the route preserved) but what madness affected bureaucrats back then then that allowed them to even consider closure of the Southern main line via Okehampton? Both ends (Plymouth-Bere Alston and Crediton-Okehampton) were retained anyway, and the line to Meldon Quarry, beyond Okehampton, had to stay open for freight. And the big town of Tavistock lost it's modern transport! You really couldn't make it up. Okay, Tavistock will be reopening soon but the entire route not only needs to be reopened soon, but proper through trains routed via it right from the start - Waterloo to Plymouth via Okehampton for example.
So I have to worry that getting to Plymouth on Monday may well be weather affected. The sea route, possibly the best in England, is a fragile thing indeed. The land round those parts has been sinking at the rate of around two inches a century since the end of the ice age. But far worse is the rise in sea levels now happening thanks to climate change, anything from 2 to 3mm a YEAR. With rising temperatures also giving storms more energy the outlook for the coastal line is bleak indeed.
It seems incredible to me that a large area of the UK could be cut off for days or even weeks if a serious storm hits the area. That diversionary route needs to be in place NOW, it may be too late in ten or twenty years time. As road traffic continues to fall despite cheap fuel the railway becomes more and more important. A small step towards tilting this balance will be the reopening - THROUGHOUT - of the Okehampton route.

Posted by Steve Sainsbury at 08:57