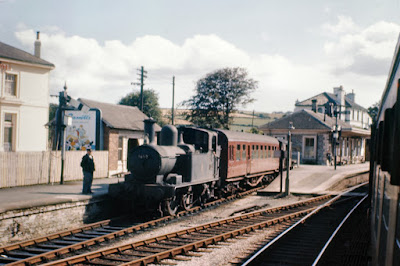 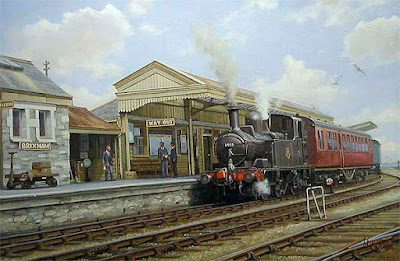 Brixham station in 1958 (painting by Mike Jeffries)
RAIL THING - RAILS OF DEVON
RAIL THING ROUTES - BRITISH BRANCH LINES
RAIL THING - TRAINS AND TRAMS TO THE SEASIDE
When you visit the Dartmouth Steam Railway if you look to your left heading towards Kingswear you should be able to see that Churston station was a junction. This was the starting point for the short branch line to Brixham. You'll probably also be surprised that such a well known and picturesque town as Brixham is not on the rail network!
The branch opened in 1868 and was originally broad gauge. It suffered one major problem in that Brixham station was situated on a hill above the town, so getting down to the good stuff was a bit of a steep walk, getting back up was worse!
The line carried a lot of fish from boats in Brixham's busy harbour, and carried a lot of passengers in the short summer season. The inconvenient placing of the station coupled with a seasonal traffic flow were always going to be an issue, as was the need to change trains at Churston (and in most cases Paignton) to get anywhere up country.
There was a small engine shed at Brixham, a wooden station and brick gentlemen's toilet.
The line was converted to standard gauge in 1892.
Auto trains served the line from the early 20th century almost to the end. DMUs operated from 1961 to 1963. These competed with bus services which began to take away a lot of the passengers as they were more convenient and dropped people in the heart of the town, rather than on top of a hill! Train services were halved in 1951 thanks to a national coal shortage and were never reinstated in full.
The line closed completely on 13 May 1963 and lifted in about 1964. The station was used shortly after closure in the film 'The System'.
There has been some speculation on reopening the line, though the station site would still be an issue and rather than just cut and paste I've provided the link below - https://www.railmagazine.com/infrastructure/stations/reconnecting-brixham
The Disused Stations site has a fine array of pictures and maps etc at http://www.disused-stations.org.uk/b/brixham/index.shtml
The Cornwall Railway Society has more info here http://www.cornwallrailwaysociety.org.uk/newton-abbot-to-kingswear-also-brixham-branch.html
Posted by Steve Sainsbury at 03:34